While Melkor was imprisoned in Valinor, there was peace in Beleriand. The Dwarves passed over the Blue Mountains into Beleriand and established the cities Nogrod and Belegost. They came in contact with the Sindar and a friendship grew between the two races. Melian, having the foresight of the Maiar, advised Thingol that the peace of Arda would not last forever. Thus, Thingol set out to build a strong dwelling for himself and his people in case evil would awaken again in Middle-earth. Together with the Dwarves, they built Menegroth, the Thousand Caves.[1]

Later the Dwarves came to Thingol and told him of the sighting of evil creatures roaming far and wide in Beleriand, learning the ways of the land and awaiting the return of their lord. Thingol then ordered his people to be armed and the Dwarves smithied weapons and armour for the Elves. Together they drove out the evil creatures, and for time there was peace.[1]

East of the Blue Mountains in Eriador dwelt some of the Nandor that wandered around the Anduin. They were troubled by the fell beasts of the north so Denethor, son of Lenwë, led much of the Nandor west across the Blue Mountains after hearing rumour of the might of Thingol's realm. Thingol welcomed them as long lost kin and they dwelt in Ossiriand.[1]

After Melkor served three ages of imprisonment, he was released, but soon turned to evil again, and destroyed the Two Trees with the aid of Ungoliant. While the Noldor still toiled through Araman Morgoth had returned to Middle-earth with the Silmarils and rebuilt his old fortress of Angband.

Shortly before the Return of the Noldor to Middle-earth, Morgoth launched his attack upon Beleriand, thinking to gain the mastery of the land quickly. The Orcs had long been breeding and multiplying and Morgoth filled them with purpose. From the gates of Angband issued a great army, it broke into two hosts which passed west between Sirion and Narog and east between Celon and Gelion.[1] Some of the bands even climbed the passes of Anach and Aglon, for the Orcs were said to have "passed silently into the highlands of the north."[1]

In West Beleriand, the bulk of the western host camped on the plain between Narog and Sirion, hurrying throughout West Beleriand; and Thingol was cut off from Círdan at Eglarest.[1] Led by Círdan, the Elves of the Havens countered but were driven back within their walls and besieged.[1]

In East Beleriand, King Thingol took the offensive, leading out the Sindar of Menegroth and the Forest of Region.[1] He called upon Denethor who led a host of Elves from Ossiriand. The eastern host of Orcs were assailed on both its sides by the Eldar and a battle ensued north of the Andram. The Orcs prevailed over Denethor and encircled him on Amon Ereb, where he fell before he could be rescued by Thingol's host, for the lightly-armed Elves of Ossiriand were no match for the iron-clad and heavily-armed Orcs.[1] When help arrived, the Elves routed the Orcs of Morgoth and of the few Orcs who escaped, most fell later to the axes of the Dwarves of Mount Dolmed.[1] 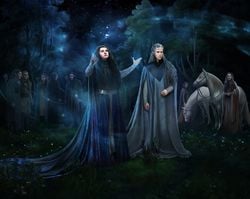 "Making the Girdle of Melian" by Steamy

The western host overran West Beleriand and the Falas, while the eastern host of Morgoth was destroyed.[1]

After the battle, Thingol withdrew his people into Neldoreth and Region, and Melian used her power to encircle this dominion with an invisible wall of shadows and bewilderment known as the Girdle of Melian.[1] The land of Eglador was thereafter called Doriath, the Guarded Realm.[1] The Orcs of Morgoth remained free to wander Beleriand, except in the Falas and Doriath.[1]

The death of Denethor in this battle led the Elves of Ossiriand to pledge to never again name a king or participate in the wars between other Elves and Morgoth.[1] After that time, many of Denethor's people left Ossiriand for the guarded forests of Doriath: these settled in Arthórien and became known as the Guest-elves, others merged with the Sindar.[1][3][4] Those few that remained took up a secretive existence, camouflaging themselves in green. From that time on, they were known as the Laiquendi, the Green-elves.[1]

The Havens of the Falas were besieged for a few months until the Return of the Noldor forced the Dagor-nuin-Giliath and the Orcs withdrew to fight the Noldor under Fëanor (which occurred shortly after).[5]

An early description of the battle first appears in The Earliest Annals of Valinor, though it was pencilled hastily later on the manuscript[6]. In the later development of the story it is part of The Later Annals of Valinor and Quenta Silmarillion.[7]

The battle was never considered to be one of the 'major battles' in the Wars of Beleriand until later it was mentioned as so in The Grey Annals.[8] The first encounter between the Orcs and Noldor in Beleriand was originally considered to be the 'First Battle of Beleriand', however Tolkien seems to have changed this idea overtime and had Morgoth's battle with the Sindar in Beleriand, before the Return of the Noldor, as the 'First Battle' which would retroactively move the Dagor-nuin-Giliath (Battle-under-Stars) as the second battle.[9] It is unclear whether Tolkien was considering having a name for the new 'First Battle' or overlooked it but it is notable that a alternative name is absent when comparing to the other battles. In The Silmarillion Christopher simply left it as it is.

Retrieved from "http://tolkiengateway.net/wiki/First_Battle"
Categories: Conflicts of the Elder Days | Sieges