I was told that, at least for certain prominent characters (like Gandalf), there needs to be a discussion before changing the top pictures of characters.

Well, I want to discuss the top pictures for Gandalf and for Lúthien Tinúviel.

The current top picture of Gandalf is: 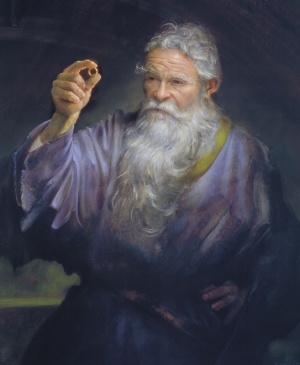 To be honest, considering that Gandalf is a developed character for both The Hobbit and for The Lord of the Rings, this has never struck me as archetypal portrayal of Gandalf, his appearance and his personality. But I did find an image in Category:Images of Gandalf that seemed to capture these things like a hammer on a nail, so to say:

This seems to capture everything—his appearance description, his usual demeanor, and it seems the most common denominator for his portrayal in the two stories he's featured so prominently in, even down to the weed he likes to smoke. Shall we use this one?

As for Lúthien, her current top picture is: 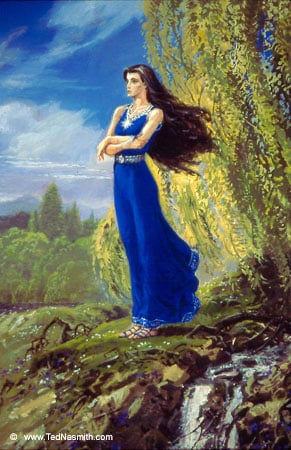 To be honest, I never thought this picture captured her in an adequate portrait style. I mean, it is a portrait (she's centered and all), and it's at her later home in Tol Galen. But if there's one thing that comes to mind about Lúthien more than anything else, it is that she is described as being the most beautiful child of Eru Ilúvatar who ever lived. This picture doesn't seem to capture the beauty of her face at all—it only vaguely barely hints at what her face might look like. In addition, if this picture portrays her specifically in the latter part of her life, it misses an important detail—after a certain point during the Quest of the Silmaril (after she magically grew her hair long to make rope à la Rapunzel), Lúthien's hair started to grow exceptionally dark in color, while the hair in this picture still has brownish highlights. But there's another most recently drawn picture by Anya Valle[former link] that struck me immediately as the perfect portrait of Lúthien to put all others instantly to shame:

In this, you can see just how her description matches her portrayed appearance. She is described as beautiful, and her face is absolutely flawless. Shall we use this one?

I concur with Breragor on both counts: your Lúthien picture is much better. I've never liked the current Gandalf one (thought it looks too much like Father Christmas/Santa Claus to be taken seriously!), but I'm also not sure the one you've picked out is much better. (I'm not keen on portraying any Tolkien character in a cartoony fashion, really, as I think it sort of demeans the characters, but that's just my quirky view!) I'd be tempted by any John Howe picture, or one of these two:

I agree on that both images could be changed. I like the suggestion for Luthien.
As for Gandalf, maybe we can crop this image? -- Ederchil (Talk/Contribs/Edits) 12:06, 5 March 2010 (UTC)

While I generally disagree that it is somehow fundamentally disrespectful to show Tolkien characters in an animated style (I think it really depends on the kind of style), I will go along with consensus. I have thought of Ederchil's suggestion of cropping John Howe's Gandalf picture, and have done so: 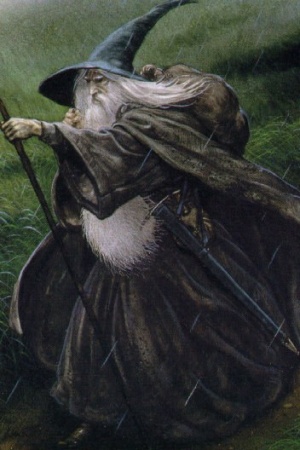 Appropriate? Between this and Roger Thomasson's portrait, I could go either way, even though I still prefer the one I suggested. And as for Lúthien, practically everyone seems to be resoundingly in favor of Anya Valle's new portrait of her. Mind if I swap Lúthien's picture (if someone else hasn't already done so by now)? - Gilgamesh 23:53, 6 March 2010 (UTC)

I thnik the cropped version is great (it's much better than the current picture, showing Gandalf in a way I believe we all imagined), so I would say go ahead and change it, but we should wait for more of a group consensus on "Yes" first. --Breragor • (Talk • Contribs • Edits) 04:18, 7 March 2010 (UTC)

Well, I will add to the consensus then; I’m all with Beragor on this - yes to the Anya Valle Lúthien (even though Ted is my friend, his strength is not really in portraiture - "drawing puppets" as he puts it) and yes to the cropped Howe Gandalf. But I’m not saying no to Roger Thomasson’s Gandalf, and the Howe one may have the problem that it’s not just in copyright, it has virtually become a trade-mark of Harper Collins for its (and its licencees’) Tolkien account, to the extent that John does not dare to give anyone permission to use it without obtaining HC’s OK (so he told the Dutch TS).
For what it’s worth, I concur with Mith’s ‘Santa Claus’ remark, and also with his opinion on the ‘cartoony’ (which is not quite the same as ‘animated’) Gandalf - I find that purple, smoke-curdling Gandalf very attractive, but to me he says Pratchett, not Tolkien. — Mithrennaith 05:53, 8 March 2010 (UTC)

Well, I actually do like the Thomasson Gandalf better than the Howe Gandalf. If I had to choose, it would be the Thomasson one. (I gave it some thought.) - Gilgamesh 07:07, 8 March 2010 (UTC)

If I may chime in, I would go with the Howe Gandalf rather than the Thomasson one. To me it seems the latter portrait is based on the Ian McKellen Gandalf. IMHO, I would prefer having a more neutral portrait. --Morgan 09:40, 8 March 2010 (UTC)

The Roger Thomasson one does say Ian McKellen but it's not a bad thing. We make a conscious effort to avoid the TLOTR Trilogy all the time (indeed, I can't think, off the top of my head, of a major article which features the a TLOTR Trilogy picture as the main article image). Peter Jackson's interpretations are just as valid as anyone else's and I happen to think not only is that a good portrait but that Ian McKellen's Gandalf was - with the exception of the eyebrows - a very accurate portrayal of the Gandalf in my head.

I was going to type "I'm indifferent between the two", but I've persuaded myself that, perhaps, the TLOTR Trilogy could do with a bit more exposure (remembering also that many people have come to Tolkien as a result of the films, with Gandalf as one of the most popular) so I would like the Roger Thomasson (and perhaps in a few months' time we can then change to the John Howe: there's no reason as to why the images have to be etched into the article for ever). And, aside from that, that portrait is great! --Mith (Talk/Contribs/Edits) 11:32, 8 March 2010 (UTC)

I agree, no reason to stigmatize the films. (BTW, Eldarion's top picture is from cut film scenes.) I think the only reason to consider excluding a film scene is for accuracy reasons. But I have no problem with pictures of, for instance, Arwen (except when she's being movie-badass in ways she wasn't in the book). - Gilgamesh 12:35, 9 March 2010 (UTC)