Freca, who claimed descent from King Fréawine, was a lord of Rohan during the reign of King Helm Hammerhand. His lands lay on either side of the Adorn west of the Gap of Rohan and he was said to have much Dunlendish blood in his veins, which was unusual for one of the Rohirrim.

Freca constructed a stronghold at the source of the Adorn, obtaining wealth and power while paying little heed to the king despite Helm calling upon him to attend his councils.

In T.A. 2754 Freca came to a council with a retinue of many men and requested that Helm's daughter be wed to his son Wulf. Helm rebuffed him and called him fat, Freca raged and reviled the king, and after the council Helm struck Freca so powerfully that Freca died from the blow. Helm then declared Wulf and all of Freca's near kin to be his enemies and the retinue fled to the west.

Rohan was invaded from the east in T.A. 2758. Sensing their chance, a host of Dunlendings invaded from Isengard and from over the Isen. Their leader was Wulf, who drove Helm into the Hornburg, captured Edoras and sat in Meduseld, and called himself king. Although Helm and his sons died in the Long Winter, his sister-son Fréaláf surprised and slew Wulf and regained Edoras.[1]

The slaying of Freca was not forgotten by his people and in the War of the Ring, over two hundred and fifty years later, many of them sided with Saruman.[2]

Freca derives from an Old English word meaning "warrior" or "bold man." It is related to the word frec, meaning "bold," "greedy" or "audacious."[3] In the Beowulf poem, Tolkien translates freca as "champion."[4] 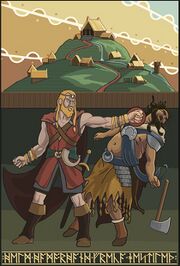 The Lord of the Rings Online tapestry: Helm Hammerhand slays Freca outside Edoras