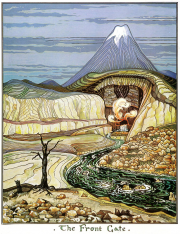 The Front Gate was a common term for the Gate of Erebor, the wide arched main entrance of the Dwarf-realm of Erebor. The Great Chamber of Thrór was near the Gate.

The entrance was at the head of the valley formed by the two southern ridges of rock thrust out from the southern slopes of Erebor.[1] Out of the gateway sprang the stream that grew into the River Running.[2]

Through the gate passed a stone-paved road, wide enough for many men abreast. The gate itself was a tall arch and at one time displayed carven work, but during Smaug's residence in the mountain the opening had become worn, splintered, and blackened. From the gate one could look out upon Dale (or its ruins during the time of the dragon).[2]

In T.A. 2770 Smaug descend upon Erebor and entered the Mountain via the Front Gate, which unfortunately was wide enough to accommodate him.[3] Over time Smaug had broken and blocked all of the other gates to the Mountain (except for the secret Back Door), leaving only the Front Gate for his use.[4]

In T.A. 2941 Smaug was slain.[3] Thorin and company, having entered the Mountain through the Back Door, came out the Front Gate not knowing the fate of the dragon. When the dwarves learned of Smaug's death they returned to the Mountain and built a high thick wall of squared stones across the gate.[4] This barrier allowed them to hold off the forces of the Woodland Realm and the Lake-men while Thorin awaited the coming of Dáin Ironfoot. However, hard upon Dáin's arrival the goblins of Bolg also appeared and the Battle of Five Armies began. In the middle of the battle Thorin and his companion dwarves levered the wall at the Front Gate to fall outwards and they then rushed into the battle.[5] After the battle was over it was at the Front Gate that Bilbo took his leave of the surviving dwarves before heading home.[6]

Dáin II Ironfoot was less fortunate: he fell in battle during the Battle of Dale at the threshold of the Gate, but the Easterlings could not take it; it protected his people in the short and unsuccessful siege that followed.[7]