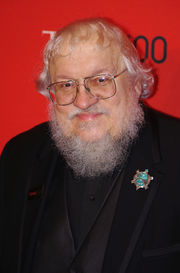 George R. R. Martin (born 20 September, 1948)[1] is an American author who primarily writes fantasy and science fiction. He is best known for A Song of Ice and Fire, a series of epic fantasy novels influenced by the works of J.R.R. Tolkien.[2]

Adam Roberts recognises Tolkien's obvious influences on Martin's work, but considers him an "anti-Tolkien", with the Song being a grimdark reaction to Tolkien's idealism.[3]

The Song was adapted in television as Game of Thrones, with some cast and crew from The Lord of the Rings trilogy being involved in the series, such as actor Sean Bean, and Weta Digital providing the visual effects.