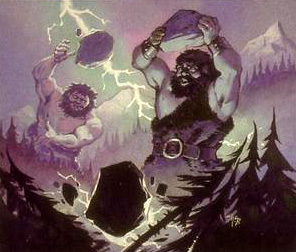 Giants were one of the mysterious races of Middle-earth, mentioned only fleetingly.

Giants are beings shrouded in mystery. Gandalf the Grey was known for telling stories about dragons and goblins and giants[1] and Bilbo had heard of giants in tales,[2] but none of these tales survive and the origin and history of the giants is obscure.[3]

A local legend among the indigenous people of Gondor told of giants making the White Mountains, to keep Men out of their lands by the Sea. One of them, Tarlang, tripped, and broke his neck. The other giants did not clean up his body, which became incorporated in the land instead. The giant's neck became Tarlang's Neck, his head Dol Tarlang, and the stones he was carrying Cûl Veleg and Cûl Bîn.[4] The city of Minas Tirith, as stood on Amon Tirith, seemed to have been "carved" by giants out of the rock.[5]

The Ettenmoors owed their name to some gigantic creatures of that land, although these were perhaps merely some kind of trolls.[6][7]

The stone-giants lived in the Misty Mountains during the late Third Age. Upon coming, they drove out the majority of the bears that lived there.[8] They found a sport in throwing rocks at each other, and then into the depths below them to hear them shatter among the trees.[9]

Presumably, not all giants were evil, as Gandalf hoped to convince a more or less decent giant to block the Front Porch to Goblin-town, to make the High Pass in the Misty Mountains safe again.[10]

Giants are notable for being definitely mentioned in The Hobbit as actual creatures of the mythological setting, yet appearing nowhere else among the creatures and races of Arda, nor participating in any of the wars. The Valaquenta doesn't mention them, nor do they appear in the wars of the Quenta Silmarillion, neither does Sauron use them in the War of the Ring.

This led some Tolkienists to assume that giants are maybe a fleeting idea of Tolkien that perhaps should not be considered canonical. Robert Foster comments that the stone-giants "may be no more serious than Golfimbul".[11]

Other theories attempt to include the giants among the known races of Arda. For example they might be a large race of Men (like Hobbits are a small race of Men), or Trolls, or simply "nature spirits" more or less like Tom Bombadil.[12] Furthermore, Douglas A. Anderson's annotations in The Annotated Hobbit: Revised and Expanded Edition express the opinion that stone-giants are a variety of troll.[13]

[edit] Before The Hobbit

Giants originally had a larger part in the legendarium. In one early manuscript, the giants are counted among the Úvanimor, servants of Melko.[14] In another manuscript, the giants are counted among the Earthlings, and are divided between the "wood-giants" (Qenya ulbandi) and "mountainous-giants" (Qenya taulir).[15] And in other early writings, two giants are named: Nan (said to be like an Elm-tree) and Gilim (whose name is Gnomish for "winter").[16][17].

It is quite possible that their appearance in The Hobbit is a relic from this early phase of the legendarium. John D. Rateliff has argued that they might have become "free agents"; not wicked, but simply not aware of their surroundings.[3]

[edit] Other names and etymologies

An early root for "giant" is given as NOROTH. This yields Quenya norsa,[18] and Noroth (likely supposed to be a Noldorin word[19]). A discarded Quenya word was hanako, from a root KHAN-AK.[20]

Giants were the wicked precursors of Ents. The elm-like features of the Giant Nan, and that in early versions of The Lord of the Rings it was the Giant Treebeard who held Gandalf captive, not Saruman,[21] makes the connection between Giants and Ents within J.R.R. Tolkien's imagination clear.[3]

An early name for the Ettenmoors was called "Entish Lands". As Christopher Tolkien notes, "Ent" comes from an Old English word for "giant",[22] and was used before Tolkien conceived the later benevolent Ents of The Two Towers. The word is seen at various points in Beowulf, for example line 2717, enta geweorc, "the work of giants".[23]

In Germanic mythology names for the giants were jotun (Norse) and eoten (Old English). From the latter word Tolkien derived the name "Ent".

In the Return of the King it is noted that Minas Tirith "seemed to have been not builded but carven by giants out of the bones of the earth".[5] Hammond and Scull have suggested that this notion derives from Old English mythology, in which giants were often portrayed as builders of ancient structures.[24]

In Farmer Giles of Ham, a giant troubles Farmer Giles' land, who chases him off with his blunderbuss.

Stone-giants are seen throwing rocks and crashing into each other as Thorin and Company travel over the Misty Mountains. In the film, they are interpreted as literally being colossal stone entities.

Several divisions and races of giants are described and given statistics, such as Stone Giants[25], Ice Giants[26], Giants of the Southern Misty Mountains[27], and Red Giants[28].

Giants, called Thunder's Companions, are one of the Hazard Creatures.

Stone-giants are golem-like creatures that appear in the fourth level, hurling rocks at Bilbo as he tries to travel along a mountain path. They are completely made of stone, and their stones are dangerous.[29]

"Mountain Giants" are large and powerful beings in the Goblin faction, with brown scaly skin. They can hurl stones at great distance, and serve as the faction's artillery units.

Several tribes of giants appear in the game, including Stone-giants, Ogres (also called Jorthkyn or Earth-kin), and Ice-giants. While some are enemy creatures, others remain neutral and can be befriended by the player.

A renegade Stone-Giant named Bargrisar appears in the game, serving as a boss character. He is the leader of a small army of Orcs and Trolls. Similar to the portrayal in The Hobbit: An Unexpected Journey, he is a being composed entirely of stone.