In Númenorean colonies and outposts, such as Belfalas and Pelargir, there were many Faithful, fully or partially of Númenórean blood, who descended from Númenor.[4] The Númenóreans venturing north of Pelargir met Men who had already settled in valleys on either side of the White Mountains, and classified them "Middle Men" due to their friendliness to the West, and recognized as descendants of the Men who abjured the Shadow.[5] There were many men of mingled blood, descended from the Men of the White Mountains during the Dark Years.[6]

After the Downfall of Númenor, the Exiles of Númenor, led by Elendil, established the Realms in Exile. Arriving at the Mouths of Anduin, Elendil's sons, Isildur and Anárion, ascended the great river and founded the realm of Gondor. The colonists welcomed them and allied themselves with the founders of the Kingdoms of the Dúnedain.[4][7] Elendil made the Faithful nobles of his kin who ruled Belfalas "Princes".[2] Even the non-Númenórean peoples, like the Men of the Mountains, swore allegiance to Isildur.[8]

Originally ruled by their High King, the Dúnedain were divided as the Dúnedain of Arnor and the Dúnedain of Gondor, following the death of Isildur (T.A. 2). Isildur had relinquished the rule of Gondor to his nephew Meneldil who became the first King of Gondor to rule in his own right, and so the Gondorians became an independent people.[4][9]

The Men of Gondor were, from the beginning of their history, always more powerful and populous than their northern counterparts, the Men of Arnor, in spite of their borders being impeded in the South and East.[5]

As the realm endured, the splendour of the Gondorians grew, until during the reign of Hyarmendacil I (T.A. 1050) it recalled the wealth and majesty of Númenor.[3][9] They built high towers, strong places, and havens of many ships; and peoples of many lands and tongues bowed to the Crown of Gondor.[4] 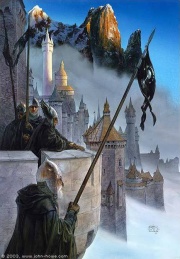 In the later Third Age, the Gondorian blood became much mingled with that of other men, especially the Northmen of Rhovanion. King Eldacar, who himself had Northmannish blood, showed favour to the Northmen who supported him. The Kin-strife led to the loss of many Dúnedain. After his return from exile, many noble houses, including the royal House of Anárion, became more mingled with the blood of "lesser" Men.[3]

The Great Plague decimated the Gondorians with many, including King Telemnar and his kin.[4][3]

After the reign of King Eärnur, royal descendants among the Dúnedain of Gondor had become few and no claimant for the throne could be found of pure Númenórean blood, or whose claim all would accept, and people were afraid of a new Kin-strife that would devastate the kingdom. Thus, by default, Mardil began the line of Ruling Stewards of Gondor.[4][3]

During the rule of the Stewards, the remaining Dúnedain of Gondor still defended the passage of the Anduin against the terrors of Minas Morgul and against all the enemies of the West.[4]

By the time of the War of the Ring, most Gondorians lived within Minas Tirith and few herdsmen and husbandmen dwelt in the townlands of the Pelennor. Many Dúnedain were in the royal lands of Anórien, Ithilien, and Belfalas, and others the southern fiefs, in the high vales of the mountain-borders, in Lossarnach, or further south in Lebennin.[6][7][10]

Upon the reunification of the Kingdoms of the Dúnedain after the War of the Ring, the Dúnedain were reunited under Aragorn II Elessar, Isildur's Heir, and their glory was restored.[4]

The Gondorians of Númenórean descent were tall, pale-skinned, with dark hair, shining grey eyes, and proud faces.[11][6] They were a proud and noble people, valiant in the face of hardhsip.[6] The Men of Gondor whose blood is more mingled with the people of the White Mountains (such as those of Lossarnach) were grim-faced, shorter, and somewhat swarthier than many others in Gondor.[6]

In the beginning of their history, the Dúnedain were blessed with a lifespan thrice the life of lesser men, yet this ever-diminished over the course of the Third Age.[12][7] After Gondor's numbers were replenished by lesser Northmen after the Kin-Strife, the mingling did not at first hasten the waning of the Dúnedain, as had been feared, but it still proceeded little by little as it had before.[3]

After the fall of the Kings, the waning was much swifter in Gondor than in Arnor.[12] In fact, Hador the seventh Ruling Steward of Gondor was the last Gondorian to live 150 years and after his time the life-span of those with Númenórean blood waned more rapidly.[13] By the time of the War of the Ring, the lifespan of the Dúnedain of Gondor had waned to little greater than that of lesser men.[14] Only few among the Gondorians passed 100 years with vigour, except in the more pure and noble houses.[14]

The original Gondorians brought extraordinary knowledge of stonework with them from Númenor, and this skill was a vital part of the character of Gondor and its people. In the early years of the realm, the Gondorians worked to erect mighty cities and monuments throughout their new land. Their original capital at Osgiliath had great stone bridges spanned the Anduin, as well as mighty houses and towers of stone.Other works marvellous and strong they built in the land in the days of their power, at the Argonath, and at Aglarond, and at Erech; and at Isengard, they made the Pinnacle of Orthanc of unbreakable stone.[4] They also built great roads that ran both north and south of the White Mountains.[15]

The Men of Gondor were noted for their great seafaring skills, especially naval warfare. They built navies and extended the sway of Gondor along the coasts west and south of the Mouths of Anduin for more than a thousand years.[4][3]

The Dúnedain of the South married late in their life and had few children. Several of the Kings of Gondor were childless.[3]

The people of Minas Tirith used horses very little and they were rarely seen in their streets, save only those ridden by the errand-riders of their lord.[6]

Many of the Men of Gondor could also speak the Elvish tongues, a notable distinction and characteristic among the Dúnedain of the South.[7] Sindarin had long ceased to be a "first language" in Gondor, but was learned in early youth (by those claiming Númenórean descent) from loremasters, and used by them as a mark of rank and high-blood.[13] It had changed very little since the Downfall of Númenor and though the Men of Gondor altered some of the sounds, they could still understand the Elves and be understood by them.[13] Westron became used more and more by the Dúnedain of Gondor themselves, so that at the time of the War of the Ring, Sindarin was known to only a small part of the peoples of Gondor (and spoken daily by fewer); they dwelt mostly in Minas Tirith and the adjacent townlands, and in the land of the tributary princes of Dol Amroth.[7] Sindarin was used to be polite, especially in Minas Tirith.[19]

Quenya was known to the learned of Gondor, a tradition which has continued from the loremasters of Númenor, to be used for places of fame and reverence in addition to the names of royalty and men of great renown.[19][7] All the royal names of the Kings of Gondor as well as all the Stewards until Mardil Voronwë were Quenya names.[7][20] At the end of the Third Age, there were more Men (those of Minas Tirith and its fiefs) that knew Quenya or spoke Sindarin than there were Elves (those of Lindon, Rivendell, and Lórien) who did either.[19]