The first Elves to dwell in Nevrast were Sindar, who had been drawn in days of old to the coasts near Mount Taras by the comings of Ulmo and Ossë. At the time the Noldor returned to Middle-earth, most of the Grey-elves of Nevrast still dwelt in the coastal region in the southwest. Turgon settled there with his own people, Noldor of the house of Fingolfin, taking up lordship of Nevrast and building Vinyamar. The first mingling of Sindar and Noldor took place in Nevrast, and they became one people.[1]

At Ulmo's urging and with his guidance Turgon, seeking a refuge from Morgoth, found the hidden vale of Tumladen within the Encircling Mountains. After Dagor Aglareb Turgon brought many of the most skilled of the Elves of Nevrast to Tumladen, where they set about building Gondolin in secret. When the city was finished, the people of Nevrast (including one third of the Noldor of Fingolfin, and even more Sindar) abandoned Nevrast and came in secret, in small companies one-by-one, through Ered Wethrin to Gondolin.[3] 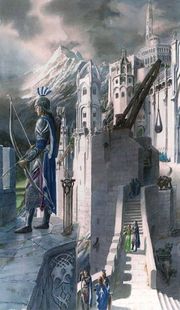 Because Gondolin was strictly separated from the rest of Beleriand by Ered Wethrin and it is unlikely that substantial numbers of other kindreds ever came to settle there. Only a few notable outsiders are known to have reached the hidden city: Huor and Húrin Thalion were the first Men to come to Gondolin and dwelt there for a year,[4] Tuor, son of Huor, made the city his home[5][2] and Maeglin, son of Eöl the Dark Elf and Turgon's sister Aredhel, fled there with his mother from Nan Elmoth.[6]

To save the Elves, Turgon began to secretly send his people out westward across Belegaer, to seek Valinor and ask the pardon and aid of the Valar. None of his mariners succeeded, but this was a wise course, as Turgon would learn later.[7]

As the Elves of Beleriand began to prepare for a counterstroke to the Dagor Bragollach, Turgon secretly began his own preparations. In F.A. 472,[8] the Union of Maedhros attacked Angband, and Turgon rode to war for the first time. Unknown and unbidden by his kin, he opened the leaguer of Gondolin and rode to their aid with an army of ten thousand. This was to be the disastrous battle that was to become known as the Nirnaeth Arnoediad. The army of the Gondolindrim escaped from the Fifth Battle thanks to the men of the House of Hador.[9]

At the Fall of Gondolin, Tuor and Idril gathered as many of the people as they could find, and escaped down their escape tunnel. In the plain they could run unnoticed because of the steam and smoke. It was a hard road through the mountains, and Glorfindel was killed battling a Balrog that lay in ambush. But at last the Exiles of Gondolin came to Nan-tathren. After resting there for some time they came down to the refuge at the Mouths of Sirion, where they mourned the loss of the White City.[10]

The Gondolindrim were living under the ultimate law of secrecy and no visitor was ever allowed to leave the city.[4]

Gondolin society comprised of houses of nobles with heraldic devices[11] such as the House of the Golden Flower.[12]

The Gondolindrim observed the Gates of Summer as a celebration.[10]

Gondolindrim is a standard formation of Gondolin (S: "The Hidden Rock") and the Sindarin suffix -rim, denoting a people.[13]

In the earliest version of the legendarium in The Book of Lost Tales, the inhabitants of Gondolin were called Gondothlim in Gnomish[14] or Ondolië in Qenya.[15]

They were those Noldoli who escaped from Melko's power after the Battle of Unnumbered Tears.[16]:157 When Tuor arrived to their city, they are described in great detail:

Indeed the Gondothlim were not bent of back as some of their unhappy kin became, labouring without rest at delving had hammering for Melko, but small were they and slender and lithe. They were swift of foot and surpasing fair; sweet and sad were their mouths, and their eyes had ever a joy within quivering to tears; in in those times the Gnomes were exiles at heart, haunted with a desire for their ancient home that faded not.[16]:159

Despite their melancholic heart, the Gondothlim became proud and confident of their works, so when Melko withdraw his spies, they thought it was because of the strengtgh of their fortress. And when Idril warned some in secret, they laughed, saying that "Gondolin would stand as long as Taniquetil or the Mountains of Valinor".[16]:170-171

The Gondothlim are also described as being organised into a number of twelve houses, each one with a leader and different characteristics.[16]:174

In the Noldorin phase of the Elvish language, the term was Gondothrim (containing the plural suffix -rim), appearing in Gondothrimbar, another name for Gondolin.[17]