Gothmog was a lieutenant of Minas Morgul. He shared his name with Gothmog, lord of Balrog from the First Age.[1]

At the Battle of the Pelennor Fields he was second-in-command to the Witch-king of Angmar, lord of the Nazgûl. He commanded the forces of Morgul after the Lord of the Nazgûl was slain by Éowyn.[2]

His fate is never specified; presumably he perished along with almost all of the servants of Sauron that fought before the gates of Minas Tirith, or he fled with the others out of Rammas and across the Anduin.

Almost nothing is known of Gothmog, not even what being he was. Tolkien scholars speculate that he might have been one of the following:

Gothmog is the second most powerful Nazgûl. He begins the game at Dol Goldur.

Gothmog is a half-troll, a crossbreed of trolls and Variags.[5] 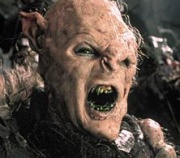 Gothmog in The Lord of the Rings: The Return of the King

Gothmog is portrayed as an Orc-general with a misshapen face. He is played by Lawrence Makoare and voiced by Craig Parker.[6] Peter Jackson wanted to show a hideously deformed orc, one that would aptly convey the "ugliness" of Mordor. The upper left side of Gothmog's body is swollen and pock-marked from a disease of some sort, as described by the design department. His pale, yellow skin may also be a consequence of this illness. Gothmog's intelligence is far above that of the common orc and he, understandably, would be the perfect link between the Witch-King and the other planners of the siege of Minas Tirith (most likely men in Sauron's service) and the mindless mass of orc infantry on the front lines. While Gothmog likely did not have the intelligence to design the attack on the White City he certainly would have been able to ensure orders were carried out. Gothmog is clearly a brutal commander, but also an over-confident one. Peter Jackson comments that Gothmog feels powerful with Mordor's massive army behind him, but in reality is a crippled orc, as seen in his failed dismount from a Warg in the Extended edition. Gothmog does, however, seem to be a capable warrior, though somewhat inhibited by his crippled left side.

In the midst of the chaos, Gothmog is forced into hand-to-hand combat. He sees a pocket of particularly stiff resistance, primarily from Théoden and Éowyn, and decides to fight Éowyn. She is a more skilled fighter than he, however, and soon injures him on his crippled left leg, rendering him essentially unable to walk and useless to Mordor's army as a whole. After Éowyn has killed the Witch-King, in an act of revenge, Gothmog attempts to kill her with a mace he finds nearby. He is, however, killed just in time by Aragorn and Gimli. As he is about to strike, Aragorn cuts off his armored right arm, but Gothmog persists and Gimli hits him in the abdomen with his axe. Aragorn then cuts through Gothmog's armor on the right side with his sword to finally bring the Orc down.

Gothmog was a wraith. He was first encountered at the end of Book 3: "Voices of the Past", where he revealed himself to the player as being Mordirith pulled back from the Void and given a new form.

Retrieved from "http://tolkiengateway.net/wiki/Gothmog_(Lieutenant_of_Morgul)"
Categories: Pronounced articles | Characters in The Lord of the Rings | Characters of unknown race | Enigmas | Servants of Sauron