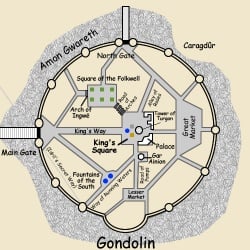 Map of Gondolin showing the Great Market on the eastern side

The Great Market was a large market on the east side of Gondolin mentioned in the Fall of Gondolin. It was defended by Glorfindel and the House of the Golden Flower upon the sack of the city, and was burned there. After the rebellious House of the Harp threw themselves on the orcs, they were pushed back to this market, where a Fire-drake consumed many of them.[1]

Because in the Fall a west-gate, a north-gate, and a south-gate are all mentioned in, it is not improbable that at this stage in the legendarium Tolkien had also envisioned an east-gate. This being the case, those coming from the east (deeper in the mountains, and thus possibly where the greater number of the mines were) would come straight onto the Great Market. This, of course, is purely conjecture.