Great beasts were used to pull the battering ram Grond during the siege of Minas Tirith.[1]

Whether these beasts of burden used by Sauron were a foul breed, Mûmakil, or a race of unknown animals from distant lands, is impossible to say for certain as we lack a more detailed description of the creatures.

Great beasts in The Lord of the Rings: The Return of the King

The great beasts are depicted as rhinoceros-like creatures. In the Weta Workshop Return of The King documentary it is revealed they are based off of Brontotherium in appearance. 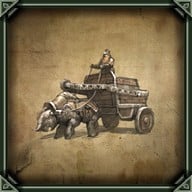 In this video game the basic design of the great beasts from Peter Jackson's The Lord of the Rings is kept. However, a new idea is introduced: the creatures called "great beasts" were originally used by Dwarves in the Misty Mountains as underground draft animals (depicted as being much smaller than Sauron's beasts of burden). The Dwarves called them yurgs.[2]

The great beasts are depicted as warty, multi-horned rhinoceros-like creatures known as "Sûlokil". They can be found on the Plateau of Gorgoroth.

Retrieved from "http://tolkiengateway.net/wiki/Great_beasts"
Categories: Other races | Servants of Sauron