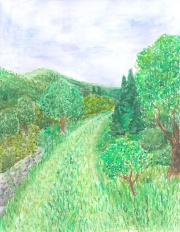 The North Road, also called the Greenway, was the part of the North-South Road in Eriador, which connected Arnor with Gondor far in the south.

The portion of the road, which the Bree-folk called Greenway[1] began at Fornost Erain in northern Eriador, it met with the East Road near Bree, and then continued south through Andrath between the Barrow-downs and the South Downs. After traversing Minhiriath, it reached Tharbad on the Gwathló, where it crossed the river.[2] Then it was known as the Old South Road.[3]

In the later Third Age after the division of Arnor into three realms it became lesser used. Use of the road virtually ended after the Great Plague and the Long Winter when Tharbad was abandoned and its bridge ruined, and the Old South Road to Dunland was mostly lost. The patch of the road around Bree-land became overgrown with grass because of disuse and so was called Greenway.[4][5][1]

Boromir took this road, crossing Tharbad but losing his horse, on his way to Rivendell. In the Reunited Kingdom of King Elessar the road was restored and became important again.