"Once I was Gwindor son of Guilin, a lord of Nargothrond, until I went to the Nirnaeth Arnoediad, and was enslaved in Angband."
― Quenta Silmarillion, "Of Túrin Turambar"

Gwindor was a prince of the Elves of Nargothrond.

He was the son of Guilin and brother of Gelmir. While he was in Nargothrond, he was betrothed to Finduilas the daughter of Orodreth. His brother was lost during the Dagor Bragollach. Wishing to avenge his loss, he joined the Union of Maedhros and followed Fingon to battle.

During the assault, Gwindor led a small company of Elves of Nargothrond stationed at Barad Eithel. But the hosts of Morgoth were prepared; they brought his brother, still alive, then mutilated and slew him in front of the company. At the sight of Gelmir's mangled corpse, he charged on the plains of Anfauglith, and thus beginning the battle of Nirnaeth Arnoediad. It is said that Morgoth trembled as his company pounded on his gates, but he had ambushed the company within Angband itself, and all but Gwindor were slain.[1] 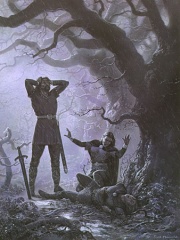 He spent fourteen years as a captive slave in the mines of Angband where the strength and beauty of his body were ruined. But he escaped, and while in Taur-nu-Fuin, he was found by Beleg who was looking for his friend Túrin. Gwindor helped Beleg locate the Orc-band that had captured Túrin, and they freed him. But Túrin thought Beleg was an orc and killed him before realizing his mistake. Gwindor consoled Túrin in his grief and led him to Nargothrond.

Túrin was admitted in the Elven realm thanks to Gwindor, but now Gwindor was worn out and did not have the power he once had before his capture. "Agarwaen" (Túrin's name while he stayed there) gained much influence among the Elves of Nargothrond and even Finduilas fell in love with him, a fact that Gwindor accepted without bitterness for Túrin. Believing that Finduilas would save Túrin from his fate, Gwindor revealed Agarwaen's identity to Finduilas, while he tried to persuade Túrin to return her feelings.

But when Túrin talked about open warfare upon Morgoth's forces, Gwindor could see the incoming doom of Nargothrond approach and counselled against this, only to be ignored. Orodreth the King of Nargothrond built a bridge, which not only eliminated the defence provided by the river Narog, but also revealed the location of the Kingdom.

Indeed, Gwindor was right and Glaurung with a band of Orcs came. The Elves were driven towards the plain of Tumhalad, where most of them, including King Orodreth and Gwindor, were slain in battle. Before dying, he assigned the protection of Finduilas to Túrin, and that she alone could save him from the Curse of Morgoth; however his foresight did not come to be, as Túrin failed to protect her.[2]

The name is not explained, however in The Etymologies, the name-element -dor (a compounded form of Noldorin taur) has the sense of "king, master".[3]

It has been suggested that the first element of the name could be gwind "pale blue".[4]

In all early versions of the legendarium, the character was called Flinding, being changed in The Earliest Annals of Beleriand to Findor son of Fuilin and then to Gwindor son of Guilin.[5]