"The staff in the hand of a wizard may be more than a prop for age. Yet in doubt a man of worth will trust to his own wisdom."
― Háma[1]

Háma was the Doorward of Théoden and Captain of the King's Guard of Rohan. He was a loyal and devoted man, though he often anticipated his orders.

Háma served as the doorguard of Edoras, the abode of the King of Rohan. On 2 March T.A. 3019, four guests arrived at his post: Aragorn, Gimli, Legolas and Gandalf.[2] He stood by the rules of the house, and ordered them all to surrender their weapons. He entered into a long argument with Aragorn who refused to hand Andúril to anyone else until he agreed to do so at the wish of Gandalf. He permitted Gandalf to keep his staff, a deliberate decision which would prove decisive in the healing of his king.

For this oversight, Háma was reprimanded by Théoden, and briefly relieved of his position as the doorguard. Háma did his Lord's bidding, and also released Éomer from captivity. The King's sister-son had been imprisoned by Gríma Wormtongue, who had been overthrown with the use of Gandalf's staff shortly before. Háma arrested Gríma, and found various missing items in his possession, including Herugrim, the King's sword.[1]

Háma rode with Théoden to the Hornburg, and fought in the battle that ensued shortly after. He fell before the great gate, and his body was hacked to pieces by a horde of Uruks.[3] He was given the honour of being buried in a grave of his own under the shadow of the Hornburg. Despite his annoyance with his doorguard, Théoden obviously had an affection for Háma, and grieved at his fall, so much so that that he personally cast first earth on his grave.[4]

On 5 March when Théoden rejected the words of Saruman the hewing of Háma's body before the gate of the Hornburg was among the grievances he cited.[3]

The name Háma comes from Old English, and means as much as "home, house, dwelling". The same element is used in Hamfast.[5] 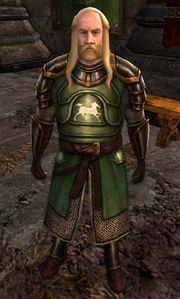 Háma from The Lord of the Rings Online

Michael Spice voiced Háma. On the ride to Orthanc the dialogue of a nameless rider's suspicions of Gandalf's motives in the novel is transferred to Hama.a In the book the rider is rebuked for these suspicions by Hama, but in this production the rebuke is made by Eomer.

John Leigh plays Háma. The lengthy dialogue with Aragorn is absent in the movie, since Aragorn is not bearing Andúril. He is killed during a Warg-attack on the road to Helm's Deep, rather than in the battle itself.

Later in the movie, Aragorn is seen talking with "Haleth, son of Háma". The name could be a reference to the synonymous siblings Haleth and Háma, the sons of Helm Hammerhand.

First met in Edoras, Háma escorts the player and their companions to an audience with King Theoden on two separate occasions. He later travels to Helm's Deep, where after the battle a song of his valiant last stand before the gates is sung by King's minstrel Gléowine.