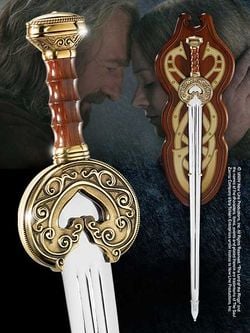 Herugrim from the Noble Collection

Herugrim was the sword of King Théoden of Rohan, hidden from him for many years by his traitorous councilor Gríma Wormtongue.[1] After being cured by Gandalf, Théoden recovered the sword, and rode with it to the Battle of the Hornburg and the Battle of Pelennor Fields.

Herugrim means "Very fierce or cruel, savage" in Rohirric, as translated through Old English. It has been noted that herugrim is in the Mercian dialect of Old English (the spelling of the "standard" West Saxon dialect would have been heorugrim).[2][3]