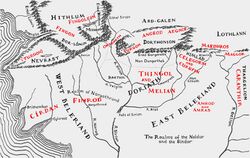 High King of the Noldor was the title given to the head of the House of Finwë in Middle-earth, having overlordship over all the Noldorin realms. The title was mostly nominal; the House of Fëanor, in particular, while they acknowledged the Kingship, paid its bearer little heed, following their own agenda under the general leadership of Maedhros. 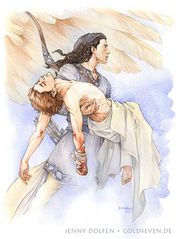 The Rescue of Maedhros by Jenny Dolfen

The forefather of the House of Finwë, and first King of the Noldor was Finwë, the first lord of the Tatyar who led his people in the Great Journey from Cuiviénen into the West to dwell in Valinor. He was slain by Morgoth at Formenos.

His eldest son Fëanor succeeded to the kingship and led the Rebellion of the Noldor back to Middle-earth to avenge his father's death and recover the Silmarils from Morgoth.[1] Fëanor died before establishing a realm and the Kingship by right belonged to his eldest son Maedhros who was captured by Morgoth.

After Fingon saved his life, in gratitude (and regretting that his father had abandoned the other Noldor in Araman) Maedhros passed his titles to Fingon's father, Fingolfin, saying: "If there lay no grievance between us, lord, still the kingship would rightly come to you, the eldest here of the house of Finwë, and not the least wise." Thus the Kingship passed from the House of Fëanor to the House of Fingolfin (fulfilling the Doom of Mandos that the Sons of Fëanor would become the Dispossessed) and the two Houses made peace. However, not all of the seven brothers accepted this in their hearts.[2]

Fingolfin became the first High King of the Noldor, ruling from Hithlum with his son, mostly during the Siege of Angband. When Morgoth broke the leaguer in the Dagor Bragollach, he rode in anger to the gates of Angband and died in single combat with Morgoth.

Fingolfin was succeeded by his eldest son Fingon who reigned during an endless war. With Maedhros, he prepared a final assault on Morgoth, which ended in disaster for the Noldor and Fingon's own death, after a short rule.

Fingon's brother Turgon succeeded Fingon nominally, but his kingship was titular at the least, as it was not possible for the "Hidden King" to rule from his Hidden City, the location of which was unknown by even his own kin. That was until Gondolin's location was discovered by Morgoth through the treachery of Maeglin.

Following Turgon's death in the Fall of Gondolin, there were no more extant Noldorin realms in Beleriand; the Kingship passed to the House of Finarfin. The son of Orodreth, the young Ereinon Gil-galad, was named High King at the Havens of Sirion once news of Turgon's death had spread.[3] Seeing the end of the War of the Jewels, Gil-galad held the Kingship throughout the Second Age, longer than any of his forebears.

[edit] In the Westlands

After the cataclysmic War of Wrath that ended the First Age, the surviving Noldor who did not depart for the Undying Lands established the realms of Lindon and later Eregion in northwestern Middle-earth. In Lindon, Gil-galad was acknowledged as the "High King of the Elves of the West".[4] He was the chief enemy of Sauron in the Dark Years, at the end of which he appointed Elrond as his vice-regent in Eriador.[5] He formed the Last Alliance with Elendil, being the commander of almost all of the Elven forces who fought in that War.[6] and died during the Siege of Barad-dûr at the end of the Second Age.

Gil-galad was the last High King for he fathered no children; however, the line of the High-elven kings, including the High Kingship of the Noldor, was alone preserved in the descendants of Elros and Elrond.[7]

In the published version of The Silmarillion, Gil-galad is said to be the son of Fingon.[8] However, in some of Tolkien's later notes, Gil-galad is said to be the son of Orodreth and thus a junior member of the House of Finarfin,[9] and Turgon's closest living relative in the male line (excluding the dispossessed House of Fëanor). Turgon's claim to the title of High King would be problematic if Gil-galad were descended from Fingon, but the issue is resolved through descent from Orodreth, which may explain the change.