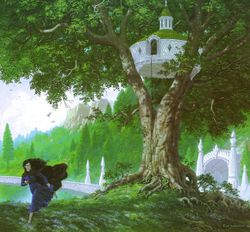 Hírilorn was an immense beech-tree that grew over the gates of Menegroth, the underground city of King Thingol. The tree was originally named Neldor, meaning "Triple-tree", because of its three massive trunks.

During the time of the Quest for the Silmaril, Thingol feared his daughter Lúthien would risk her life to seek out her love Beren and help him in his quest. He had a house built among the branches of the great beech and imprisoned Lúthien there. Because of this the tree was then called Hírilorn, meaning "Tree of the Lady"[1] in Sindarin, though it did not hold Lúthien for long. Using her magical arts, she escaped from Hírilorn and set out to aid Beren, eventually helping him recover a Silmaril from Morgoth's Iron Crown.

Just as the Quest for the Silmaril began near Hírilorn the quest ended there as well. During the Hunting of the Wolf, Beren received a mortal wound from Carcharoth and died in Lúthien's arms beneath the branches of the Tree of the Lady.[2]

When Túrin was seventeen years old news from Dor-lómin ceased due to the vigilance of the servants of Morgoth. Túrin went looking for King Thingol to ask for mail, sword, and shield; he found the king with Melian sitting under Hírilorn. There they advised him and his wish for arms was granted.[3]