He was one of the many leaders of Men who brought companies to Minas Tirith; in his contingent were three hundred gallant green-clad men.[1] A week later, he fought in the Battle of the Pelennor Fields, rushing to the aid of Éomer and the Rohirrim, in the van with Imrahil of Dol Amroth, Húrin of the Keys and Forlong of Lossarnach. He was slain on the fields before the City.[2] 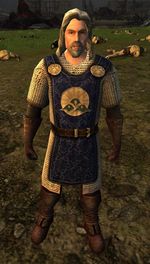 Hirluin in The Lord of the Rings Online

The name Hirluin is composed of the two elements hîr "lord" and luin "pale, fair" (and by extension "blue").[3]

Hirluin is first met in Minas Tirith shortly before the Battle of the Pelennor Fields, drinking in a tavern and remembering the days of their youth with his good friend Forlong. Later, both of them lead the defence of the White City, fighting on the wall alongside other defenders. When the Rohirrim army arrives, both of them rush outside the city gates and faces their foes together before Hirluin is slain before his friend.

Retrieved from "http://tolkiengateway.net/wiki/Hirluin"
Categories: Characters in The Lord of the Rings | Dúnedain | Gondorians | Third Age characters