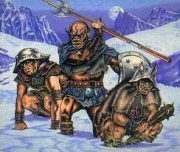 Hobgoblin was a name "for the larger kinds"[1] of Orcs found in Middle-earth in the Third Age. In the quest for Erebor, Gandalf warns Bilbo Baggins that the Grey Mountains are "simply stiff with goblins, hobgoblins, and orcs of the worst description".[2]

The term appears only once in The Hobbit). It has been speculated that "the term perhaps, but doubtfully, refers to the large soldier-orcs known as Uruks"[3], possibly since Tolkien had not created the latter name by the time of his writing of The Hobbit.

In a 1971 letter to Roger Lancelyn Green, Tolkien commented that "the statement that hobgoblins were 'a larger kind' is the reverse of the original truth."[4]

Hobgoblins are a breed of large, tusked Orc-kind found in the Grey Mountains.