"We have reached the borders of the country that Men call Hollin; many Elves lived here in happier days, when Eregion was its name..."
― Gandalf in The Fellowship of the Ring, "The Ring Goes South"

Eregion or Hollin was a realm of the Noldor in Eriador during the Second Age, located near the Walls of Moria, under the shadow of the Misty Mountains. It was the only lasting Noldorin realm outside Lindon.[1]

After the end of the First Age, most of the Noldor who remained in Middle-earth dwelt in Lindon under the rule of Gil-galad, their High King.[1] After some seven centuries, Celebrimbor, the grandson of Fëanor, chose to depart from Lindon and passed eastward, drawn by the promise of mithril in the mines of the Dwarves. Many Elves followed Celebrimbor and founded the realm of Eregion.[2] Its capital, Ost-in-Edhil, was founded in S.A. 750.[2] It was at this time that Galadriel and Celeborn travelled from Lake Nenuial and settled in Eregion for a while.[3]

The Elves of Eregion lived in harmony and trading freely with the Dwarven civilization of Khazad-dûm. A high road ran from Ost-in-Edhil to Khazad-dûm, and an unprecedented friendship between the two races began in that time.[1] Within Eregion, an important society or guild of craftsmen emerged with Celebrimbor as its leader: these were the Gwaith-i-Mírdain, "the People of the Jewel-smiths", and their work was said to be the greatest since the time of Fëanor.[1]

[edit] Creation of the Rings

In S.A. 1200, the Elves of Eregion became friends with Sauron, under the guise of Annatar, the "Lord of Gifts".[2] After "Annatar" taught and assisted the Gwaith-i-Mirdain with creating the Rings of Power, he left Eregion. Celebrimbor's smiths proceeded then to forge Three more on their own with the knowledge already gained from him. Their forging was completed by around S.A. 1590.[2] Annatar didn't learn about them, and they were "unsullied", free from Sauron's corrupting influence.

When Sauron created the One Ring in S.A. 1600, the Elves who wore the Rings of Power heard his voice and realised they had been deceived.[1][2] In S.A. 1693, Celebrimbor sent his three rings away for safekeeping: he gave Nenya to Galadriel in Lothlórien, who advised him to send the other two to Lindon, away from Sauron, so he gave Vilya to Gil-galad and Narya to Círdan.[1][2] 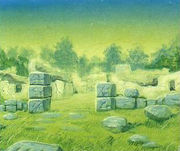 Main article: War of the Elves and Sauron

The Elves of Eregion did not stand alone against Sauron. From Lindon, Gil-galad sent a force commanded by Elrond to lend them aid. Before Elrond could come to Eregion, the Dark Lord demanded that the Rings of Power be turned over to him, and when he was refused he brought his full force against Eregion.[3] In S.A. 1697, Ost-in-Edhil fell, with Celebrimbor himself leading a last desperate defence on the steps of the Jewel-smiths' guild house.[3] He was taken captive by the Orcs, then shot through with Orc-arrows, and by some accounts, Sauron used Celebrimbor's body as a banner as he turned to face Elrond's army approaching from the north.[3]

Sauron gathered up the Rings of Power that remained, and laid waste the land of Eregion, bringing an end to its people. The surviving Elves of Eregion seem to have scattered, as there are various accounts of their fates. Some fled northward to join Elrond's host, and that host was itself forced into retreat; some of these Elves of Eregion settled at Rivendell when Elrond founded it shortly afterwards.[3] They were joined there by others of their kind who had escaped into the Wild, and only later found their way to safety. Many of these people seem to have later abandoned Middle-earth and sailed into the West.[3]

Eregion is a Sindarin name. It means "Holly-region"[4] or "Land of Holly"[5]. It was called "Hollin-land" or short "Hollin" in Westron[6] by Men.[7] Hollin is an old form, still used locally, of "holly". The region abounded in holly-trees.[6] Paul Strack suggests that the name is a combination of ereg ("holly") and the suffix -ion ("-region").[8]

In the Unfinished Tales it is stated that "Celeborn and Galadriel therefore went eastwards, about the year 700 of the Second Age, and established the (primarily but by no means solely) Noldorin realm of Eregion."[3] This contradicts the information published in The Lord of the Rings which gives the founding of Eregion in the year 750.[2] It is possible to reconcile the texts if 700 is seen as the year of their moving eastwards with 750 as the year of the foundation of Eregion; the canonicity of this, however, is unknown.