The House of Finarfin was a noble house of the Noldor formed by the descendants and followers of Finarfin, third son of Finwë. A particular aspect of this house is that many had golden hair, due to their half-Vanyarin heritage. 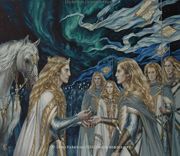 Lord of the Third House in Middle-earth by Elena Kukanova

During the march on Aman, Finarfin himself repented when he heard the Doom of the Noldor and returned to the West with some of his followers.[1]

His children, led by Finrod, came to Beleriand, and that is why his House is also named House of Finrod. Galadriel belonged to this house as well as Gildor Inglorion[2] and perhaps Glorfindel[3]. Such Elves remained in Middle-earth until the late Third Age.

Finarfin did not come to Middle-earth, but his children were called collectively by the Sindar as "the children of Finarfin", in Sindarin Nost Finarfin ("the house/family of Finarfin").[4]

In earlier versions, Finrod was the name for Finarfin, so in the Noldorin stage it was called Nos Finrod ("House of Finrod").[5]