The Houses of Healing was an infirmary in Minas Tirith.

The Houses were surrounded by lawns and trees, set near to the Citadel-gate and the southward wall in the sixth circle of Minas Tirith. The chief healer was the Warden of the Houses of Healing.

When Faramir had been saved from the pyre of Denethor, Gandalf and Beregond carried him in a bier to the Houses of Healing, with Pippin following. Soon Gandalf and Pippin departed but Beregond, after reporting to the chief of the Guard, went to the houses to serve and guard his captain.[1]

Later, Faramir was joined by Éowyn, Merry, and others suffering from the Black Shadow. Ioreth, one of the few women permitted to stay in the city during the siege due to her healing skills, wished aloud for a king since "The hand of the king are the hands of a healer." Gandalf heard her and brought Aragorn into the Houses to tend the wounded. Using athelas Aragorn was able to revive Faramir, who called him his king, Éowyn, and Merry. When Aragorn left the houses he found many waiting for him at the door and after eating he spent most of the night tending the wounded.[2]

While the Army of the West marched to the Black Gate, the Lady Éowyn arose in the Houses of Healing and begged the Warden to be discharged. The Warden brought her to Faramir, now able to walk in the gardens of the houses, where he dissuaded her from leaving. As the days passed their love bloomed and after the fall of Sauron it was in the Houses of Healing that they plighted their troth.[3]

Tolkien considered to give a Noldorin name to the Houses of Healing. After some variations, he created the name Bair Nestad, but it was never used in narrative.[4] 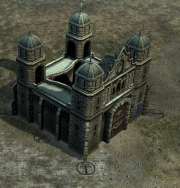 The Houses of Healing addition.

2003: The Lord of the Rings: The Return of the King (Extended Edition)

The Houses of Healing is an addition to the fortress of the Men faction. At 1000, it is the second cheapest. It reduces hero revival time and cost by 20%. In the expansion pack, it also heals nearby allies.