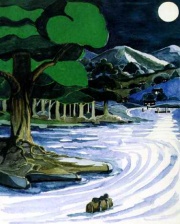 J.R.R. Tolkien - Bilbo comes to the Huts of the Raft-elves

The huts of the raft-elves referred to a village used by the raft-elves, that was to be found on a protruding bank of the Forest River, close to the eastern edge of the forest of Mirkwood.[1][2][3] It is stated that the subjects of Thranduil "had houses or huts on the ground and in the branches",[4] so it is possible that these huts were situated within the Woodland Realm.

The raft-elves collected empty barrels from the Elvenking's Halls in this village, brought by the current of the Forest River. The barrels were then tied together and left to float to Lake-town (from where barrels filled with goods had originally been brought up the river to the Woodland Realm).[1]

Bilbo Baggins, hanging on to a barrel, spent a night hiding outside the village of the raft-elves while pursuing Thorin and Company (who were escaping the imprisonment of the Wood-elves inside empty barrels).[1]

The Raft-elves reside in the village of "Celebannon", which consists of a dozen houses.[5]