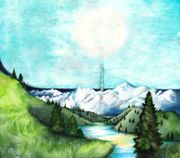 Illuin was one of the Two Lamps of the Valar, made by Aulë, filled by Varda and hallowed by Manwë in ancient days to bring light to the world. It was set up on the mount Helcar in the northern part of Middle-earth while the other Lamp, Ormal was set up in the south. It was destroyed by Melkor, and where it fell it created the inland Sea of Helcar.[1]

Because of its apparent etymology as "blue light" (whereas its pair referred to "gold" light), it is possible that Illuin was a precursor of Telperion, the silver one of the Two Trees of Valinor, and of the Moon.[3]

Retrieved from "http://tolkiengateway.net/wiki/Illuin"
Categories: Creations of the Valar | Quenya names