Ioreth was a woman of Gondor during the War of the Ring.

Ioreth was originally from Imloth Melui in Lossarnach, but moved to Minas Tirith and worked in the Houses of Healing. By T.A. 3019 she was the oldest woman working there and was well versed in old lore. Upon seeing the illness-stricken Faramir, she said that she wished there was still a king in Gondor, remarking "For it is said in old lore: The hands of the king are the hands of a healer." Gandalf heard this, and brought Aragorn to the Houses of Healing, where he was able to heal many of the sick. Ioreth was very talkative, which annoyed Aragorn and Gandalf.[1]

Like "Gamling", it was specifically chosen to suit the character of the old nurse.[2] 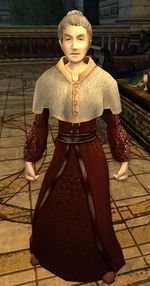 Ioreth in The Lord of the Rings Online

Prunella Scales is credited as Ioreth in the fifth episode of the second run, "Minas Tirith and Mount Doom".[3] As Scales was in her twenties at the time, it is unknown to what extent the "old lady" aspect was used.

Pat Franklyn is credited as "The Old Woman". She is not referred to as Ioreth at any time, but her lines are lifted from Ioreth's.[4]

The voice of Ioreth is provided by Vilma Jamnická.

Ioreth is found in the Houses of Healing after the battle, where she asks the player to assist her with mixing herbs and delivering medicine to the wounded.