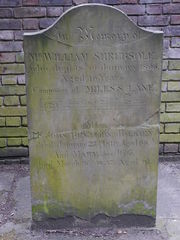 John Benjamin Tolkien and his wife Mary are buried in the same grave with William Shrubsole, an English musician and composer of the hymn-tune "Miles Lane".