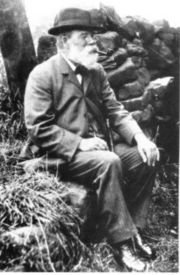 Joseph Wright (31 October 1855 – 27 February 1930) became one of J.R.R. Tolkien's tutors at Oxford. It was during Tolkien's years as a school boy that he first became acquainted with Wright's works, specifically his Primer of the Gothic Language. This was an eye opener for Tolkien into the Germanic language and Wright "proved a good friend and adviser" (Letter 308).

Wright's impact on Tolkien was not limited to German however, and he learned much of Greek, Latin, and Welsh from Wright. The two continued to stay close friends and Tolkien frequently remembered going over to Wright's house for tea and discussion. Tolkien was also an executor of Wright's will.

In 1925 Wright wrote a letter of recommendation for Tolkien's application at Rawlinson and Bosworth chair of Anglo-Saxon:

"I have known Professor Tolkien intimately since the beginning of his undergraduate days at Oxford, and have greatly admired his keen interest in the philological study of Latin, Greek, and more especially the Germanic Languages. He regularly attended my classes and lectures for two years on Comparative Philology in general, and on Latin, Greek, and Gothic, and I formed a high opinion of his attainments in these subjects..."
― An Application for the Rawlinson and Bosworth Professorship of Anglo-Saxon in the University of Oxford by J.R.R. Tolkien, Professor of the English Language in the University of Leeds, June 25, 1925