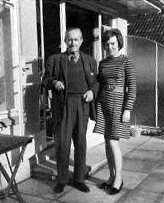 Joy Margaret Hill (1936-1991) became the secretary of J.R.R. Tolkien during the 1960s, working for George Allen & Unwin since her late teens.[1] In 1968 she discovered in Tolkien's library the poem Bilbo's Last Song and Tolkien gave it to her as a gift.

On 30 November 1969 Joy Hill attended the event "An Afternoon in Middle-earth", delivering the speech "Coping with a cult". The programme booklet for the event also included an article by Hill on fan letters to Tolkien, in which she writes:

"They come from all over the world; they come in English, French, German and Elvish... they come three posts a day, five days a week; they have been coming for quite some time and they are still coming; no longer just a few a day but an ever-increasing flow [...] The English are cautious in their approach and often begin 'I have hesitated to write and thank you' whereas writers from across the Atlantic are very much bolder. 'Dear darling Professor' wrote one hippy from San Fransisco, 'I have been on a trip to Middle-earth and it is indeed a beautiful place. I must see you'. From Norfolk, Virginia, one letter ended: 'One day I shall corner you on a remote little star and we shall talk'."[2]