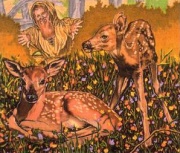 However when the Two Lamps where destroyed and there was no light in the Outer Lands, the Valie put them to sleep and they stopped growing during the Sleep of Yavanna, until there would be light again.[2] Only Melkor's beasts roamed the earth in the shadows, that were kept at bay by Orome the hunter.[1]