Khamûl[note 1] was one of the nine Ringwraiths, second only to the Witch-king himself. Lieutenant of Dol Guldur since T.A. 2951,[1] he is called "Shadow of the East",[2] and "the Second Chief" or "the Black Easterling".[3] 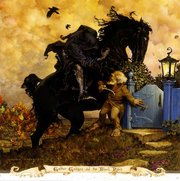 Gaffer Gamgee and the Black Rider by Stephen Hickman

He was a king of Easterlings during the Second Age, and he was one of the nine Men to whom Sauron gave one of the Rings of Power. Like the others, he became a powerful sorcerer and ruler until he eventually faded into a Wraith and his will was surrendered to Sauron.[4] By S.A. 2251 he was already one of Sauron's servants.[5]

It was said that, after the Witch-king, Khamûl was the most ready to perceive the presence of the One Ring, but his power was most confused and diminished by daylight.

In T.A. 2951 Sauron returned to Mordor and declared openly to his enemies. Khamûl and two other Ringwraiths were sent to the fortress of Dol Guldur, with the former taking command.[6]

During the War of the Ring he was one of the Ringwraiths who entered the Shire, and asked Hamfast Gamgee for "Baggins". However it was the day Frodo Baggins had left Hobbiton, and he then pursued the Hobbits to Bucklebury Ferry in the Shire some days later.[3][note 2] He was also one of the six[7] or nine[8] Ringwraiths, led by the Witch King, that followed Gandalf on Shadowfax and attacked him at night on Weathertop; they were repulsed after a violent fight on 4 October, and Frodo and Aragorn saw the lights of that battle from their camp.[1] The Witch King and Khamûl remained watching Weathertop (waiting for the Ring Bearer to come) for two days thereafter, along with three other Wraiths.[1]

Following the destruction of the One Ring, Khamûl perished with the rest of the Ringwraiths.[9]

Khamûl received two named miniatures in the game, one depicting his cloaked form and the other his armored appearance as seen in The Hobbit: The Battle of Five Armies. The latter explicitly identifies Khamûl as the Ringwraith with a more ornate version of the Easterling helmets seen in The Lord of the Rings.

During the nighttime section of the Shire level, Frodo overhears the conversation between Khamûl and Gaffer Gamgee just as he is about to deliver the Bag End key to Number 3, Bagshot Row. The conversation plays out as it does in the novel except that Khamûl's lines are audible. Instead of simply walking back down the path after the conversation ends, Khamûl (who is mounted on his horse) intimidates the Gaffer by rearing his steed while letting out a ghastly wail, before galloping back down the road. No voice actor is specified for the role.

The Nazgûl in charge of Dol Guldur is known simply as "The Lieutenant of Dol Guldur", formerly "The Cursed Rider". He is said to have been an Easterling chieftain who wielded the Ring "Orôm, the Warmonger".