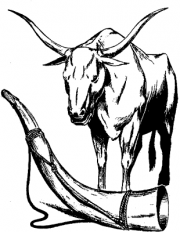 Kine of Araw as portrayed in Middle-earth Role Playing

Kine of Araw were a species of oxen that lived in fields in Rhûn near the Sea of Rhûn, and they were hardier and wilder than any other oxen in Middle-earth. Legends claimed that they were descended from the cattle of Oromë, the Huntsman of the Valar, and so they were named the Kine of Araw[1][2] (Araw being the Sindarin form of Oromë's name).

The Kine were famous as the quarry of Vorondil the Hunter, ancestor of the Ruling Stewards of Gondor. It was he who cut a horn from one of these beasts and fashioned a hunting-horn from it, the Great Horn, which came to be carried by the eldest son of the Ruling Steward from Vorondil's time onward. The last heir to bear the horn was Boromir, who saw it broken in two in his battle with Orcs beneath Amon Hen.[3][1]

In an unpublished manuscript held at the Bodleian Library, the Wild Kine were likened by Tolkien to aurochs.[4]