King of the Noldor

King of the Noldor 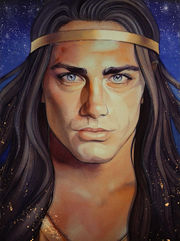 The Noldor, that part of the Tatyar who participated in the Great Journey, were led by Finwë. Finwë was one of the three elves summoned to Valinor by Oromë to serve as messengers to their fellows,[1] and later became the ruler of the Noldor in Valinor, who lived in the city of Tirion upon Túna. He became known as the King of the Noldor, and had three sons and two daughters from two marriages.[2]

Finwë followed his eldest son Fëanor into exile at Formenos,[3] and was killed by Melkor following the Darkening of Valinor. Following his father's death, Fëanor returned to Tirion even though the Valar had not lifted his exile and claimed the kingship of the Noldor. This cast Fëanor's inheritance of the kingship into question, but the rhetorical skill of Fëanor convinced the majority of the Noldor to follow him in his rebellion against the Valar, although some loved Fingolfin more.[4]

After the Kinslaying at Alqualondë, the youngest son of Finwë, Finarfin, repented of the rebellion and was permitted to return to Tirion because his people had played no part in the Kinslaying. He remained in Tirion and ruled the Noldor who remained in Aman.[5] However, the hosts of Fëanor, the primary instigator of the Kinslaying, and Fingolfin, some of whose people were late participants in it, continued towards Middle-earth.[4]

The hosts of Fëanor and Fingolfin arrived in Middle-earth separately, following Fëanor's betrayal of his half-brother by burning their captured fleet at Losgar, with Fëanor arriving first. Fëanor, while calling himself King of the Noldor, was killed in the Dagor-nuin-Giliath before he was able to establish a realm. His eldest son, Maedhros, inherited the claim to the kingship, but was soon after captured by Morgoth.[6]

The arrival of the host of Fingolfin, battered by the crossing of the Grinding Ice, complicated matters, as Fëanor's betrayal had driven a rift between the two hosts. This was resolved by Fingon, son of Fingolfin, rescuing Maedhros from his captivity in Thangorodrim. Maedhros subsequently apologised for the burning of the ships and ceded his claim to the kingship, and that of the entire House of Fëanor, to Fingolfin and his House, despite the disagreement of his brothers. Thus the Kingship passed to the House of Fingolfin, fulfilling the Doom of Mandos according to which the Sons of Fëanor would become the Dispossessed.[6]

The High Kingship passed to the House of Finarfin's last living dynast, the young Ereinion Gil-galad, son of Orodreth.[9] Gil-galad was High King through the Second Age until his death in the War of the Last Alliance but sired no heirs. He was the last High King of the Noldor; his death meant the extinction of the entire House of Finwë in the male line in Middle-earth and afterwards the office was left vacant.

In the Third Age, the House of Finwë survived in Middle-earth only in the female line, in the persons of Galadriel, Elrond, their descendants, and the descendants of Elros. Upon the departure of the bearers of the Three Rings at the dawn of the Fourth Age, the line of the High-elven kings, including the High Kings of the Noldor, was alone preserved in the descendants of Elros and Elrond.[10]

[edit] King of the Noldor in Valinor

The first two kings were not distinguished as being in Valinor, since the entire population of the Noldor lived in Valinor at that time.[2]

Maedhros, first son of Fëanor, nominally held the title after his father's death, but spent his entire reign as a captive in Angband. Later, Fingon rescued him, and Maedhros surrendered the Kingship to his uncle and Fingon's father Fingolfin, who ruled the Noldor in Middle-earth since that time.

[edit] High King of the Noldor in Middle-earth

Fëanor nominally ruled in Middle-earth for a short time before his fall in the Dagor-nuin-Giliath, although he never officially claimed this title and never established a realm.