Léod was a great horseman and during his rule he captured a white foal that was wild and proud. When the horse was grown, Léod tried to break him, but instead was thrown off of the horse and he hit his head on a rock and died (he was but 42 and his son 16). His son, Eorl, later tamed the horse, naming him Felaróf. He would become the first of the great Mearas.[1] 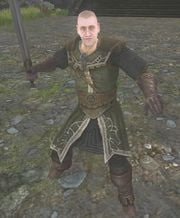 Léod in The Lord of the Rings Online

A tapestry depicting the death of Léod hangs at Meduseld.

Léod appears briefly in a flashback narrating the history of the Éothéod.