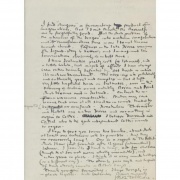 Letter 122, dated 18 December 1949, was sent to Naomi Mitchison, and Tolkien announces the completion of The Lord of the Rings, and refers to The Silmarillion, and discusses Nordic and Celtic languages.

The original letter has been sold through Sotheby's on several occasions, most recently on 11 December 2006. Sotheby's describes the letter in the following way: "Autograph letter signed ("J.R.R. Tolkien"), 2 pages on one leaf on stationery embossed "3 Manor Road, Holywell, Oxford" (7 x 5 in.; 178 x 127 mm, sight), 12 [SIC] December 1949, to Mrs. Naomi Mitchison ... Matted, framed and double-glazed with a photograph of Tolkien."

Tolkien announces the completion of The Lord of the Rings to the Scottish novelist and poet, Naomi Mitchison: "I hope to give you soon two books, about which at least one criticism will be possible: that they are excessively long! One is a sequel to The Hobbit which I have just finished after 12 years (intermittent) labour. I fear it is 3 times as long, not for children (though that does not mean wholly unsuitable), and rather grim in places. I think it is very much better (in a different way.) The other is pure myth and legend of times already remote in Bilbo's days . . . " A good friend of Tolkien, Mitchison was one of the proofreaders for The Lord of the Rings.

Tolkien also criticizes his publisher's use of the maps as endpapers in The Hobbit: " . . . it was a blunder of the publisher to make the maps into end-papers (which they were not meant to be) and put the specially designed end-papers in reduced form to face p. 147! or thereabouts."

He mentions dragons but that he is not informed enough on the subject to have much of an opinion. "I find 'dragons' a fascinating product of imagination. But I don't think the Beowulf one is frightfully good. But the whole problem of the intrusion of the 'dragon' into northern imagination and its transformation there is one I do not know enough about." He then focuses on his linguistic studies of Norse and Celtic languages. "I know Icelandic pretty well ... and a little Welsh, but in spite of efforts I have always been rather heavily defeated by Old Irish or indeed its modern descendant. The mix-up was politically and culturally great and complex—but it left very little linguistic trace on Icelandic."

Retrieved from "http://tolkiengateway.net/wiki/Letter_122"
Category: The Letters of J.R.R. Tolkien