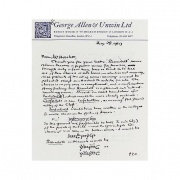 "Among Sotheby's 14 actual Tolkien items to be auctioned by on December 13 there are letters from J.R.R. Tolkien, and there are detailed pictures of them too. Two of these letters contain a very interesting linguistic material. One of them (to Anthony D. Howlett, from May 28, 1969) shows a discussion of the name Rivendell, with examples of tengwa renderings of Imladrist and Rivendell. The accompanying text is also of great interest. It explains that Sindarin imlad means 'flat-floored valley' and that rist is 'cleft'. Best English rendering of this name is, according to Tolkien, Corfedale or even Corfebottom. Another letter (to Peter Alford, from the years 1956-58) provides a lengthy discussion of the Elvish greeting: Elen síla lúmenn' ómentielmo. One thing attracts our attention: Tolkien explains the pronominal possessive suffix -lma as a variety of -lme 'we' which in fact means: 'you and I/we'. The Quenya verb sil- 'shine white' is derived - according to this letter - from the stem ÞIL-."[1]

[Anthony D. Howlett Tolkien responds to Howlett's] "application to use the name of Elrond's house for the name of his own home. Tolkien mentions the recent use of this word as a house-name:

...only a few have been so kind as to tell me of their choice or ask leave - which is not necessary, since products of the art of name-coining cannot be patented... The choice is in any case a compliment, and a confirmation of my feeling that Rivendell is a pleasant and natural-sounding name.

Noting that the name "...is not an exact translation of Imladrist...", Tolkien suggests a closer rendering of the original "...as meaning 'flat-floored valley of the Cleft'...'" and then provides versions in his elvish languages of Quenya and Sindarin with notes. Also included is an additional slip on which Tolkien summarizes his four versions of either "Imladrist" or "Rivendell".[2]