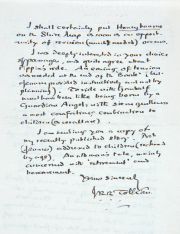 “Thank you so much for writing such kind and appreciative letters, brevity is not necessarily a virtue. I am interested in what you say of your name. I think it still probable that your father’s name nonetheless comes from near Evesham. It must be derived from a place-name; and though -Bourne (stream) is widespread in England, and occurs in Kentish names, Honeybourne is found only in Cow H. and Church H. near Evesham. There was a considerable movement and interchange between Kent and Worcestershire, largely because of the industries of fruit-growing. I shall certainly put Honeybourne on the Shire Map as soon as an opportunity of revision (much needed) occurs. I was deeply interested in your choice of passages, and quite agree about Pippin’s ride. An easing of tension was needed at the end of the ‘Book’ (but of course provided instinctively and not by planning). To ride with Gandalf must have been like being borne by a Guardian Angel, with stern gentleness a most comforting combination to children (as we all are).

I am sending you a copy of my recently published story. Not (of course) addressed to children (reckoned by age). An old man’s tale, mainly concerned with ‘retirement’ and bereavement.”