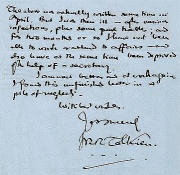 "[...] I recognize his talent, but it has always seemed to me hopelessly corrupted. Though in most of the 'pictures' proceeding from his studios there are admirable or charming passages, the effect of all of them to me is disgusting. Some have given me nausea [...]"

He also accused Disney of being in his business practices "simply a cheat: willing and even eager to defraud the less experienced by trickery sufficently 'legal' to keep him out of jail"; he adds that his own affairs are in the hands of Allen & Unwin ("a firm with the highest repute"); that he is "not innocent of the profit-motive" himself (although "I should not have given any proposal from Disney any consideration at all. I am not all that poor [...]"; and that he has been delayed for some weeks in finishing this letter because of illness and lack of secretary.