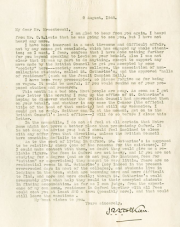 [Description:] "The earliest, typewritten letter discusses, in a discouraging way, the practicalities of Mroczkowski's proposed studies in Oxford"[4]

[Excerpt]: "As far as I can judge, from the experience of my own sons, residence in Oxford together with all fees would cost you at least £50 a term . . ."[5]

[From Adam Andrusier Autographs (London, LON, United Kingdom)]: The author writes to his Polish translator, a Mr. Mroczkowski, opening, "I am glad to hear from you again. I heard from Mr. C.S.Lewis that he was going to see you, but have not heard any more". He goes on, with further reference to his fellow author, "I must, I fear, confess that I have done nothing further for you beyond speaking to Lewis on your behalf. Also, I was not clear that it was my part to do anything, except to support any move made by the British Council to get you accepted by some 'society' here." Tolkien goes on to discuss his correpondent's potential move to Oxford in more detail, including the financial costs and living quarters. Then, in his post-script, he delivers more negative news in relation to the British Council, who had done "nothing further, for they cannot do anything, until the matter of your scholarship is settled. frankly, I formed the opinion that the prospects did not seem very good. There is nothing, of course, to prevent a scholar as yourself. from staying here and studying, and meeting other persons, such as myself or Mr. Lewis. if he can afford it on his own account. my advice is go for an American scholarship, if you have a chance for one."[3]