"Míriel was the name of his mother, who was called Serindë, because of her surpassing skill in weaving and needlework; for her hands were more skilled to fineness than any hands even among the Noldor."
― Quenta Silmarillion, "Of Fëanor and the Unchaining of Melkor"

Míriel Þerindë, also spelled Serindë, was the first wife of Finwë, King of the Noldor. Her son was Curufinwë, whom she called Fëanáro, which means "Spirit of Fire". Miriel's hair was described as being silver in appearance, an unusual colour for one of the Noldor.

Míriel lived in the blessed realm of Aman, in the hill city of Tirion on Túna, together with her husband Finwë, King of the Noldor. Her hands were skilled in the shaping of fine things, and she was unsurpassed in weaving and needlework. 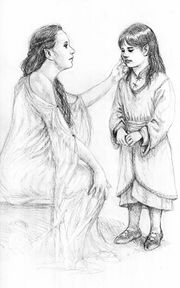 Míriel and Feanáro by Francesco Amadio

There was much love between Míriel and Finwë, and even more for her son, but after giving birth to Fëanor in Y.T. 1169,[2] her body and spirit were consumed and she wished to be released from life everlasting, saying that there was no strength left in her to bear another child. Despite Finwë's grief, and her unhappiness at abandoning her young child, Míriel departed for the gardens of Lórien, to rest and regain her strength and vigour. But during her rest, the fëa departed from her body, and entered the Halls of Mandos leaving her body lying lifeless and still in Y.T. 1170.[2] Maidens of Estë took care of her body while her spirit remained in the Halls of Mandos, so that it would not wither. In essence, she had died of free will. This was seen as a shocking event by the Valar and Eldar which had never before occurred.[3]

But Finwë was in grief, and felt ashamed being the only Elf in Aman without a wife. Manwë summoned the Valar in Council, and the result was the 'Statute of Finwë and Míriel', which only allowed re-marriage if the dead spouse refused to be re-embodied. Vairë told Míriel of this and of the sorrow of Finwë, but Míriel refused to come back to life. In words of the Valië: "[The spirit of Míriel] is small, but it is strong and obdurate: one of those who having said this will I do make their words a law irrevocable unto themselves". However, Mandos summoned the spirit of Míriel and warned her that she could change her will with the time, living in grievance till the end of Arda. But Míriel remained silent and Mandos accepted her choice.[4]

Years later, Finwë knew this doom, being allowed to marry again, having many other children with Indis. Fëanor was resentful of her, and observed her influence on Finwë, including his speech which started to resemble that of the Vanyar and considered it a disrespect against his mother.[5]:336

After the deaths of Finwë and Fëanor, the former couple were reunited in the Halls of Mandos. Meeting Finwë again, Míriel felt lightened from her sadness and released of her reluctant will. She spoke to him through thought, apologizing of her errors and promising to weave a tapestry about his people and children. Seeing that Míriel wished to come back to life, Finwë asked Vairë to allow it, while he would remain in the Halls of Mandos till the end of Arda with his son Fëanor. Mandos accepted this, and Míriel's spirit was released and went to her body in Lórien. Then she awoke again like from a dream, and was refreshed.

However, she was still sad and did not wish to come back with her people, so she went to the House of Vairë, being the only living creature to live there. She became the handmaid of Vairë, and fulfilled her promise, weaving historical webs telling the deeds of the Noldor.[6]

Míriel is Quenya, but it is not glossed. As Paul Strack explains, it can mean "Jewel-daughter", being a combination of mír ("jewel") + -iel ("daughter").[7]

Her mother-name Þerindë (also pronounced Serindë), means "the Broideress", referring to her great skill in embroidery for 'her chief talent was a marvelous dexterity of hand', which she applied to her skill of embroidery, 'achieving in what even the Eldar thought haste' embroidery that 'was finer and more intricate than any that had before been seen'.[5]:333 It is to be noted that she preferred and requested her kin use the older pronunciation of Þerindë, and that her son upheld the use of Þ over s out of respect and in her memory.[5]:336

After coming back to life, she was renamed Fíriel ("She that died" or "She that sighed"). Till her death, Elves had no words for natural death, so they used the term fírë ("expire") because Míriel had sighed a deep breath in the moment of death. The term was associated with death, being used for the death of Men.[8]

In the beginning of The Shibboleth of Fëanor, Fëanor is an adult, and Míriel is still alive. There the similarities between mother and son, such as their stubbornness, are revealed. Fëanor's reaction to his mother's death is also presented, as he guarded her hröa, which was placed in a garden, for some time after her passing.[5] In the published Silmarillion, Míriel died soon after his birth.[3]