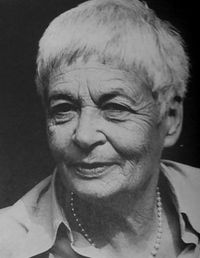 Margaret Bister was born as the daughter of a German-born Frenchman in Berlin. In her hometown she began to study economics, English and French. In 1936, Margaret Bister broke off her studies for personal reasons and began to work as a commercial clerk and foreign language correspondent. After World War II, she worked for the military government in Berlin and translated newspaper articles. In 1948, she left her hometown and moved to Frankfurt am Main. She had a short marriage to a civil engineer, with whom Margaret Carroux had two children.[3]

Margaret Carroux began in the early 1960s to translate fiction and non-fiction books into German. She translated books by authors like Edna O'Brien, Chaim Potok, Françoise Sagan and Nadine Gordimer.[4] Her most famous translation is that of The Lord of the Rings (published as Der Herr der Ringe, 1969/1970), which she translated with the poetess Ebba-Margareta von Freymann.[5]

The "Carroux-Translation" of The Lord of the Rings was the first German translation of the book. A second was made by Wolfgang Krege, published in the year 2000.[5]

Margaret Carroux tried to capture the literary style of Tolkien's original work, to create the same atmosphere in the German version. During her translation work, she used the Guide to the Names in The Lord of the Rings. In the original books, all characters differ from each other through different levels of language, from the formal archaic speech to the everyday speech. Some critics of Carroux accused her of standardising this linguistic feature too much, for a nearly constant old language-style. But many fans like her old-fashioned rendering, because it follows the original text's flow and style very closely.[6] In an interview in 1977, Margaret Carroux emphasized, that she had some disputes with the editor while translating The Lord of the Rings. The editor wanted, against Carroux’s intention, a purely literal translation of the books and therefore, revised the unpublished translation several times.[3][6]

In 1991 and 2008 revised editions of the "Carroux-Translation" were published. The first one, revised and improved by Roswith Krege-Mayer, contains for the first time the first part of Appendix E (Pronunciation of Words and Names), translated by Helmut W. Pesch.[5]

In the second one, Stephan Askani, editor of publisher Klett-Cotta, and translator Lisa Kuppler corrected some place-names (some were retranslated) — especialy of villages in the Shire — and errors in the spelling of Elvish or Old English words and names in the text and the poems. The corrections are based on the Guide to the Names in The Lord of the Rings and the actual HarperCollins edition of The Lord of the Rings of 2004.[7]

In September 1967 Margaret Carroux contacted J.R.R. Tolkien through publisher Rayner Unwin, about her work on translating The Lord of the Rings. Carroux sent to Tolkien her translation of Leaf by Niggle to allow him the opportunity to evaluate her work as a translator of his literary works. She asked Tolkien for a meeting, too. But Tolkien was ill at that time and so the meeting took place three months later on December 13, 1967 in Oxford. In early December Carroux had already sent the part of The Lord of the Rings she had translated so far (about a hundred pages) to Tolkien.[8]

After their meeting in Oxford, they corresponded with each other to discuss some problems Carroux experienced while translating, especially with the poems. Carroux sent him some scripts and Tolkien praised and elated her.

"I should certainly not have taken the trouble that I took with your speci­mens, if I had not felt that you had the sympathy and understanding required, and only needed a little help and some encouragement to per­severe in what is a very difficult task."
― Fragment from Tolkien's letter to Carroux, September 29,1968

In the same letter Tolkien talks about his scrupulosity, if a co-translator, for example a lyricist, would read the text intensely enough, to understand the exact meaning or importance of the poems. Because of this, Tolkien extended to Carroux more help with the poems.[8]