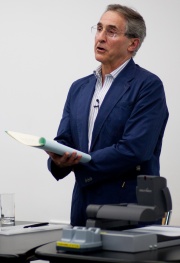 Michael Tolkien at The Return of the Ring, 2012

Michael George Reuel Tolkien (b. 11 January 1943) is the grandson of J.R.R. Tolkien, being the son of Michael H.R. Tolkien. Michael was born in Birmingham, raised in a rural community in the Chiltern Hills, and then moved several times due to his father's changes of employment.

Michael is a poet and author of several books. He retired in 1994 due to ill health. He has been married three times since 1967 and has two daughters, Catherine and Ruth. Michael is a member of the board of the Tolkien Estate.