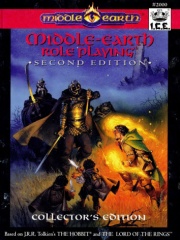 In the MERP game system, attributes are rating between 0 and 100, and skills can surpass these limits (under 0 or over 100). An attack roll would consist of a percentile roll + skill rating + attribute rating - target's dodge rating. This result was looked up on a table against the victim's armor type (leather/plate). Most hits in combat would cause a 'critical' which would be rolled and looked up on separate tables. For some, these criticals are quite entertaining due to their variety and creativeness, but for others the task of adding and subtracting high numbers and then consulting a table is the height of roll-playing, not role-playing.

Spell casters had the unique advantage in MERP that they learned lists of 10 spells (1 per level) as a unit. Once a character learned the Healing list, he would be able to cast increasingly better healing spells as his level increased.

The setting for this game predates the War of the Ring by around 1400 years (the majority of the modules were set in the years after the Great Plague, ca. Third Age 1640) and as such it represented a version of Middle-earth different to that seen in The Lord of the Rings or The Hobbit.

Two different companies issued authorized figures for use with MERP. In 1985, Grenadier Models released their Lord of the Rings Middle Earth series. In 1987, the license was transferred to Mithril Miniatures, which still produces Middle-earth metal miniatures (although post-ICE figures have no reference to MERP).

MERP has a loyal and strong following, which can be seen in the multitude of material which has been written for the system since ICE lost their license. The main channels are: