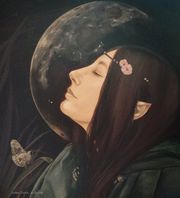 Moths were nocturnal insects of a kind closely related to butterflies. Thorin and Company saw them fluttering about at nightfall when they were trying to find the route to Rivendell.[2] Curiously, they are also mentioned as dwelling in Mirkwood, where the moths were black or dark grey, and grew to a huge size.[1]