Nenya was made by Celebrimbor of Eregion alone [2] between c. S.A. 1500 and c. 1590, along with the other two Elven Rings, Narya and Vilya.[3] After Celebrimbor discovered that Sauron had forged the One Ring in S.A. 1600,[3] he went to Lothlórien to seek the counsel of Galadriel. They were unwilling to destroy the Rings, so Galadriel advised Celebrimbor to keep them hidden, unused, and dispersed far from Eregion. Celebrimbor followed this counsel, first by giving Nenya to Galadriel. The power of this Ring strengthened and beautified the realm of Lothlórien, but it also increased Galadriel's desire for the Sea and return to the West.[6] 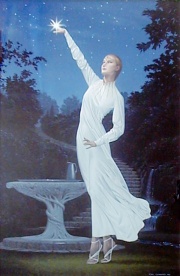 The ring wielded by Galadriel was not normally visible. On 14 February T.A. 3019,[7] Frodo Baggins saw Nenya on Galadriel's finger, for it could not be hidden from the Ring-bearer. Samwise Gamgee told Galadriel he only "saw a star through your fingers".[4][note 1]

Nenya's power was preservation, protection, and concealment from evil. After the destruction of the One Ring and the defeat of Sauron, its power faded along with the other Rings of Power. Galadriel bore Nenya on a ship from the Grey Havens into the West, accompanied by the other two Elven Rings and their bearers.[8] With Nenya gone, the magic and beauty of Lothlórien also faded and it was gradually depopulated, until by the time Arwen came there to die in Fo.A. 121, it was deserted and in ruins.[9]