Niënor in Brethil is the fifteenth chapter of The Children of Húrin. 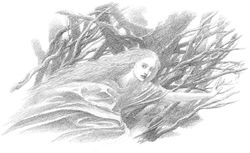 Nienor in Brethil by Alan Lee

Niënor ran all day without rest, tearing off all her clothes until she was entirely naked. But at dusk, her madness lifted and with a great weariness she fell asleep. When she woke up in the morning, all things seemed new for her and she was both amazed and fearful of the world. She wandered around the woods until the nightfall, where she the laid herself down in a green mound, lying awake and naked in the rain.

That night, a group of Men of Brethil approached, and with them was Turambar, and they found Niënor lying on Haudh-en-Elleth. Turambar was astonished, but he wrapped her up with his coat and carried her to their lodge. There they tried to ask the mysterious woman who she was, which made her nervous and cry. However, Turambar and the woman warmed to each other, and he named her Níniel, the "Lady of Tears", and she accept it repeating the name.

In the morning the group headed back to Ephel Brandir. On the way they crossed the bridge of Dimrost, and when Níniel saw the waters from the bridge she started shivering uncontrollably; thereafter the waterfall was known as Nen Girith, the "Shuddering Water". Níniel was already ill when they arrived at Ephel Brandir, and Brandir took care of her with the help of many women, but she only seemed calm when Turambar was with her.

Once Níniel recovered, they had to teach her to speak, and she loved to learn new words and go to Brandir's house to ask him the names of things. Thus Brandir began to love her, but her heart was for Turambar and she was only happy with him.

After a year had passed, there was peace in Brethil thanks to the fear that the Orcs had of the Men of Brethil. Níniel was completely recovered, strong and beautiful, and Turambar asked for her hand in marriage, and she was happy. But when Brandir heard about this he warned her and told her that Turambar was indeed Túrin of the House of Hador who was always followed by misfortune. Trouble by this, Níniel waited until the following spring, when Turambar promised her that he will only go to war to defend her and their people. They married at mid-summer with a great feast, and a were given new house in Amon Obel to make their home.

Retrieved from "http://tolkiengateway.net/wiki/Ni%C3%ABnor_in_Brethil"
Category: The Children of Húrin chapters