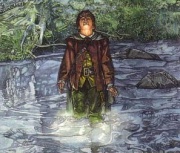 Nimrodel was the small river that rose in the eastern foothills of the Misty Mountains, and flowed east to meet the Celebrant on the western borders of Lothlórien. When the Fellowship of the Ring came to the river they could hear it splashing over a waterfall on their right. There used to be a bridge but it had long ago disappeared. It was said that the water of the stream was "healing to the weary". After passing through Khazad-dûm, the Fellowship crossed and stopped by the Nimrodel to rest.[1]

With the Resource Event Healing of Nimrodel, players can heal their characters.