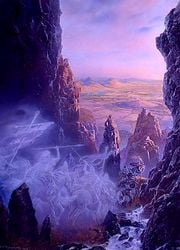 The King of the Oathbreakers by Ted Nasmith

The Oathbreakers, also known as the Dead Men of Dunharrow, were the shades of Men of the White Mountains.

They were originally the Men of the Mountains. They were a Pre-Númenórean people that lived in the White Mountains during the Second Age and were related to the Dunlendings[1] and to the folk of Haleth[2]. They had worshipped Sauron in the Dark Years before the foundation of Gondor.[3]

After Gondor was founded in the last years of the Second Age, their King swore allegiance to Isildur at the Stone of Erech on the Hill of Erech. When Sauron returned and grew in might, Isildur commanded the Men of the Mountains to fulfil their oath and fight beside Isildur against their ancient master, they broke their oath and refused to join the Last Alliance. As a reaction Isildur cursed them to remain without rest until their oath was fulfilled and foretold them that the war against Sauron would last for years uncounted and that they would be summoned again before the end. The Men of the Mountains fled from the wrath of Isildur and hid in secret places in the mountains, had no contact with other men and slowly dwindled. Afterwards the wraiths of the Sleepless Dead spread terror around the Hill of Erech and all places where the Men of the Mountains had lingered when they were still alive.[3]

The Dead Men haunted the caverns beneath the Dwimorberg and their wraiths appeared in the valley of Harrowdale that lay in the mountain's shadow in times of trouble and coming death and caused the local people to lock themselves in their houses in fear.[4] The wraiths of the dead also filled the population near the hill of Erech with fear, who knew that the host of the wraiths was led by the King of the Dead.[3]

During the War of the Ring, Isildur's Heir, Aragorn, commanded the Dead to let them pass and to come to the Stone of Erech when he encountered them in the Paths of the Dead. The Dead followed him through the Paths of the Dead and the Blackroot Vale south of the White Mountains to the Stone of Erech. There Aragorn commanded the Oathbreakers to follow him to Pelargir and announced that he would hold the oath fulfilled when all the servants of Sauron have been removed from this land.[3] The Dead fulfilled their oath and drove away the allies of Sauron through fear at the fords over the river Gilrain at Linhir and at Pelargir. In return for their aid, at the shore of the river Anduin at Pelargir, Aragorn held their oath as fulfilled, commanded them to never again trouble the valleys, to depart and to be at rest.[5]

Before breaking their oath, these men were known simply as the Men of the Mountains. Afterwards, they were referred to as the Dead of Dunharrow, the Sleepless Dead or just the Dead, the Grey Host, the Shadow Host, the Shadow-men, the Shadows of Men or simply the Shadows.

The "Army of the Dead" was only used in The Lord of the Rings (film series).

The Army of the Dead in The Lord of the Rings: The Return of the King

The Dead were originally envisioned as walking skeletons, but this had to be revised after Pirates of the Caribbean: The Curse of the Black Pearl came out and portrayed a similar idea with its undead hosts. The Dead were instead shown as glowing green ghosts. Contrary to the book, the Dead follow Aragorn all the way to Minas Tirith, and destroy Sauron's troops. It is after this that they are ultimately set free.

The Oathbreakers of Dunharrow are the inspiration for several other factions of Oathbreakers and other cursed shades, such as former soldiers of Arthedain cursed for betraying Fornost to the forces of Angmar. The King of the Dead was named Rioc. Some of the Dead Men of Dunharrow refused to follow Aragorn, and reaffirmed their allegiance to Sauron. These were known as the Ruthless Dead.

Retrieved from "http://tolkiengateway.net/wiki/Oathbreakers"
Categories: Cleanup | Characters in The Lord of the Rings | Gondorians | Organizations | Pre-Númenóreans | Servants of Sauron | Undead