Of Aulë and Yavanna is the second chapter of the Quenta Silmarillion section within The Silmarillion. 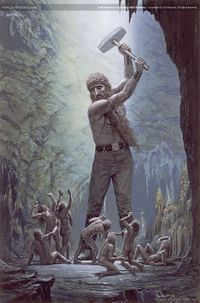 Aulë, who was the great smith of the Valar, wished to create life who he could teach his craft to. His impatience in waiting for the Children of Ilúvatar to awake got the best of him and he secretly decided to create the Seven Fathers of the Dwarves. Ilúvatar soon learned of Aulë's actions and showed him that the Dwarves had no free will, as Aulë had no power to create new life. Aulë offered his creation to Ilúvatar and felt they should be destroyed; however, Ilúvatar intervened and granted them life of their own. But he gave Aulë one condition: the Dwarves had to rest until the Awakening of the Elves, whom Eru had chosen to be the Firstborn of his Children.

When Yavanna, the spouse of Aulë, learned of her husband's deeds, she feared the Dwarves, or even the Elves and Men, might harm her plants and trees which she loved. She went to Manwë to seek protection. Manwë spoke with her, and while considering her wishes, he saw the Song of Creation and remembered the Vision in which Eru told him not to fear, as spirits would also awake to protect what Yavanna held dear. Thus Manwë proclaimed that the Eagles will dwell in the mountains, and the Shepherds of the Trees will walk in the woods.

[edit] History of the text