Of Beleriand and Its Realms is the fourteenth chapter of the Quenta Silmarillion section within The Silmarillion. 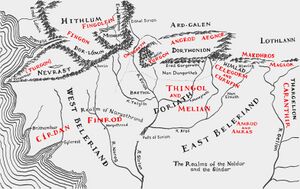 The northwest regions of Middle-earth were known as Beleriand. This was the realm to the east of the Blue Mountains and Eriador.

In the days before the awakening of the Elves, Morgoth had built the great fortress of Utumno and a secondary fortress called Angband that served as an outpost of his realm. Both of these fortresses had been destroyed by the Valar. Yet when Morgoth escaped and returned to Middle-earth, he raised anew the fortress of Angband and made it even stronger. Morgoth raised three mighty pillars of slag called Thangorodrim to cover the fortress. He also delved great tunnels and pits into the earth, where his armies would grow and great smithies would forge weapons for them.

To the west of Angband was the realm of Hithlum, or Hísilóme the land of Mist in Quenya, for it was called this due to the great smoke Morgoth created when the Noldor first came to Beleriand. This was ruled by Fingolfin. His son Fingon received the rule of Dor-lómin. The region became known for its horses and cavalry.

To the west of Hithulm was the land of Nevrast, ruled by the other son of Fingolfin named Turgon. This was a land circled by mountains and hills. The land itself was wet and had many marshes. Turgon's halls were in Vinyamar.

To the south of Ard-galen was the highland of Dorthonion, a land of forests ruled by Angrod and Aegnor, two brothers of Finrod Felagund who served as his vassals. The tower of Minas Tirith, manned by Finrod's last brother Orodreth,[1] was in Tol Sirion between Dorthonion and the Shadowy Mountains.

Beleriand itself was a land criss-crossed by rivers such as the Narog, but the greatest river was the Sirion, which ran down the length of Beleriand and cut it into eastern and western halves. Finrod became the ruler of all Elves on the western half except for the Elves of the Falas, who were led by Círdan. But both he and Finrod were allies, and together they built havens in Brithombar and Eglarest.

On the middle of Beleriand, Thingol was the mightiest Elf-lord, ruling the realm of Doriath. On his northern border was the horrible Nan Dungortheb where evil spiders dwelt. Doriath extended from Sirion in the west border to the river Aros in the south and east.

Sirion was not the only great river of Berleriand. It had tributaries such as the River Narog. Where the Narog river flowed into the Ringwil was a great gorge, where Finrod Felagund founded the realm of Nargothrond. It was a hidden city, protected by both the river and the gorge.

To the east of Doriath was the territory of the Sons of Fëanor in East Beleriand. This region was cut in pieces by the River Gelion and its tributaries. In the south six rivers broke off it, giving the region the name of Ossiriand, the land of seven rivers. This was the home of the Green-elves who had never left Beleriand on the Great Journey. This land would later be known as Lindon in later days.

To the north of Ossirand was the lands owned by the Sons of Fëanor. Maedhros owned the northernmost territory that was closest to Angband, for it was a flat and open area that was vulnerable to attack. This would be known as the March of Maedhros. His capital was a fortress named Himring. Maglor his brother guarded the territory to the east where there was a gap in the hills. Celegorm and Curufin would be rulers of the land to the south in Aglon. Caranthir ruled the land along the river Gelion beside the Blue Mountains, and here he would have dealings with the Dwarves of Nogrod and Belegost. Finally, Amrod and Amras controlled the southernmost part of East Beleriand on the western side of Gelion.