Of Eldamar and the Princes of the Eldalië is the fifth chapter of the Quenta Silmarillion section within The Silmarillion. 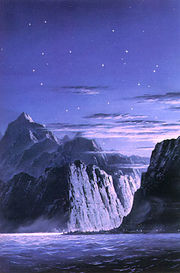 The Light of Valinor on the Western Sea by Ted Nasmith

The Great March of the Elves finally ended. The Vanyar and the Noldor went first to Valinor, riding aboard an island pulled by Ulmo. There they would begin to integrate with the Valar and settle across the continent. Part of the island broke off, however, and became known as the isle of Balar.

However, not all of the Eldar went to Valinor, for the Teleri tarried on the shores of Beleriand in search of their missing lord. Those who remained built the cities of Brithombar and Eglarest on the shores of Falas, with Círdan as their leader. Yet afterwards, partly at the behest of the Noldor, Ulmo went back to Middle-earth to collect the Teleri.

The island was dragged back across the sea to Middle-earth. Many Teleri embarked, but they did not wish to wholly lose access to Middle-earth. Ulmo listened to their request, stopping the island before the journey was finished. The island came to rest upon the shores of Aman and would be known as Tol Eressëa, the lonely isle, for it was still separated from the Undying Lands by the sea. This physical separation from the other elves gradually began a process whereby their languages were sundered.

The Noldor and Vanyar initially lived within a gap of the Pelori Mountains on the border of Aman. There they made a city known as Tirion, with many white walls and towers, and even a scion of one of the Two Trees, known as Galathilion. The Vanyar became the elves most loved by Manwë and Varda, while Aulë loved the Noldor most of all, teaching them much of his smithing and crafts. The Noldor became highly skilled and generous with their work.

It was during these years that the royal family of the Noldor came into existence. The Noldor were ruled by a high king named Finwë, who had three sons: Fëanor, Fingolfin, and Finarfin. Yet they were not of the same mother, for Miriel, Finwë's first wife, died in childbirth. Fingolfin and Finarfin were the result of his second marriage to a Vanyar named Indis.

Finwë's sons would have their own progenies: the seven Sons of Fëanor; Fingon, Turgon, and Aredhel to Fingolfin; Finrod, Galadriel, Angrod, Aegnor, and Orodreth[1] was in Tol Sirion between Dorthonion and the Shadowy Mountains. to Finarfin. Each of these would in their time be important in their own right, but their times had not yet come.

The Teleri, at last wishing to see the light of Valinor and of their friends among the other elves, desired to leave Tol Eressëa and go to Aman. Ulmo sent them Ossë to teach the art of shipbuilding. The Teleri built their ships and sailed to the coasts of Aman, where they eventually built the port of Alqualondë and became renowned for their swan shaped boats. Gradually, they would become close the Noldor of Tirion.

Even though both Noldor and Vanyar had come the whole way to Aman, they would gradually begin to shift apart. The Vanyar sought to learn more of Aman and the Valar, while the Noldor still remembered Middle-earth and sought to increase their knowledge of the world. As the years went on, Fëanor and his son became students of Aulë where they learned much of the skills of smithing and craftwork. Thus would begin the rise of the most prominent elf of all.